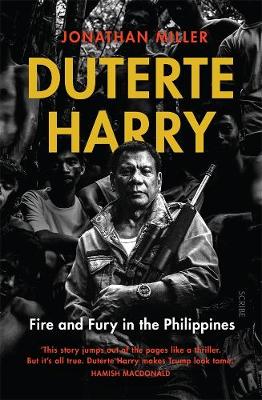 fire and fury in the Philippines

The first biography of Rodrigo Duterte, the murderous, unpredictable President of the Philippines, whose war on drugs has seen thousands of people killed in cold blood.

Rodrigo Duterte was elected President of the Philippines in 2016. In his first 18 months in office, 12,000 people were murdered on the streets, gunned down by police officers and vigilante citizens - all with his encouragement.

Duterte is a serial womaniser and a self-confessed killer, who has called both Barack Obama and Pope Francis 'sons of whores'. He is on record as saying he does not 'give a shit' about human rights. Yet he is beloved of the 16.6 million Filipinos who voted for him, seen as vulgar but honest, a breath of fresh air, and an iconoclastic, anti-imperialist rebel.

In this revelatory biography, Channel 4 News' Asia Correspondent Jonathan Miller charts Duterte's rise, and shows how this fascinating, fearsome man can be seen as the embodiment of populism in our time.
'"Fire and fury" is the mentality of despots everywhere. Miller has terrifyingly captured that condition - bullying, threatening, vengeful, and lethal.'
-Michael Wolff, author of Fire and Fury

'This book is a history, but also a fable in a time of increasing authoritarian populism. It is a great read, crackling with moral outrage.'
-Weekend Australian

» Have you read this book? We'd like to know what you think about it - write a review about Duterte Harry book by Jonathan Miller and you'll earn 50c in Boomerang Bucks loyalty dollars (you must be a Boomerang Books Account Holder - it's free to sign up and there are great benefits!)

Jonathan Miller is Channel 4's Asia Correspondent based in Bangkok. Three months after Rodrigo Duterte was elected in the President's southern home city of Davao, Jonathan became the first foreign journalist to challenge him face-to-face on the devastation wrought by his controversial and deadly war on drugs. Jonathan was born in Derry, Ireland, and has lived much of his life in Southeast Asia, including correspondent postings with the BBC.

A Preview for this title is currently not available.
More Books By Jonathan Miller
View All

The Holy Scriptures the Only Instruction to the Christian Preacher: Concio Ad Clerum: A Sermon, Delivered in the Chapel of Yale-College, and Addressed to the Reverend Clergy, on Commencement Evening, September 9, 1812.
$32.51 $36.12