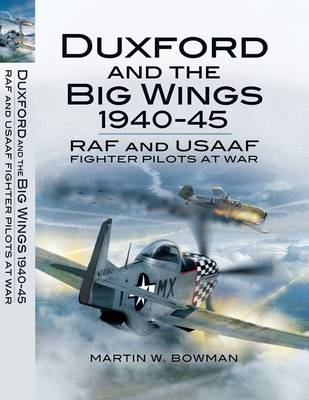 Description - Duxford and the Big Wings 1940-45 by Martin Bowman

A pulsating account of the young RAF and American fighter boys who flew Spitfires, Hurricanes, Thunderbolts and Mustangs during 1940-45. It is unique in that the story is told using first person accounts from RAF, German and American 'Eagles' who fought in the skies over England in the Battle of Britain in the summer of 1940 and the great air offensives over occupied-Europe from 1942 onwards. The first five and a half chapters cover the Battle of Britain period when the RAF squadrons fought dog fights with the Luftwaffe and then fought them in gathering strength using the 'Big Wings to meet the bomber fleets attacking London. The second part of the book covers the Eagle squadron period, which was expanded with America's entry into the war. The action moves to the USAAF 'Big Wings' of Thunderbolts and Mustang fighters that flew escort missions and duelled with the Luftwaffe over the continent during the massive bomber raids on German targets in France, the Low Countries and the Reich itself. A whole host of incredible first hand accounts by British, Polish, Czech, German and American fighter pilots permeate the action and describe the aerial battles as only they can. This unique book also includes many accounts and photos that have not previously been seen before while the rich mix of combat accounts from all sides are brought together for the first time in one volume. AUTHOR: Martin Bowman is one of Britain's leading aviation authors and has written many books on World War II and post-war aviation history. His previous books published by Pen & Sword include Stratofortress, SEPECAT Jaguar, several guides to WW II wartime airfields in the Aviation Heritage Series and Reich Intruders. He lives in Norwich in Norfolk . ILLUSTRATIONS 60 mono in plates

» Have you read this book? We'd like to know what you think about it - write a review about Duxford and the Big Wings 1940-45 book by Martin Bowman and you'll earn 50c in Boomerang Bucks loyalty dollars (you must be a Boomerang Books Account Holder - it's free to sign up and there are great benefits!)