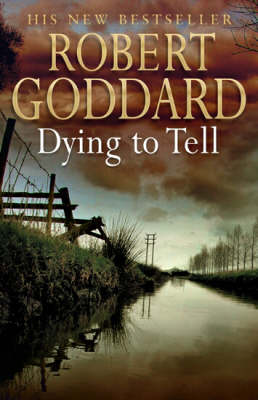 It is autumn in the little Somerset town of Glastonbury. Lance Bradley is just beginning to feel that he is idling away his life there as usual when he receives a call for help from the eccentric sister of his old friend Rupert Alder. Inexplicably, Rupe has stopped sending the money that his dysfunctional siblings depend on. Reluctantly, Lance goes to London to learn what he can, only to find that his friend has vanished. Rupe's employers, the Eurybia Shipping Company, want him tried for fraud. A Japanese businessman called Hashimoto claims he has stolen a document of huge importance. And a private detective is demanding money for trying to trace on Rupe's behalf an American called Townley, who was involved in a mysterious death at Wilderness Farm, near Glastonbury, back in 1963, that year of so many momentous events which just happens also to be the year of Lance's birth. No sooner has Lance decided that whatever Rupe was up to is too risky for him to get involved in than he finds that he already is involved, and the only way out is to get in deeper still. Where is Rupe? What is the document he has stolen? Who is Townley?
And what happened at Wilderness Farm in the summer of 1963 that holds the key to a secret more amazing than Lance Bradley could ever have imagined?

Other Editions - Dying to Tell by Robert Goddard » Have you read this book? We'd like to know what you think about it - write a review about Dying to Tell book by Robert Goddard and you'll earn 50c in Boomerang Bucks loyalty dollars (you must be a Boomerang Books Account Holder - it's free to sign up and there are great benefits!)

Robert Goddard was born in Hampshire. He read History at Cambridge and worked as an educational administrator in Devon before becoming a full-time novelist. His bestselling novels are: Past Caring, In Pale Battalions, Painting the Darkness, Into the Blue (winner of the first WH Smith Thumping Good Read Award and dramatized for TV in 1997, starring John Thaw), Take No Farewell, Hand in Glove, Closed Circle, Borrowed Time, Out of the Sun (a sequel to Into the Blue), Beyond Recall, Caught in the Light, Set in Stone and Sea Change.

The Fine Art of Invisible Detection: The thrilling BBC Between the Covers Book Club pick
$18.39 $22.99

This is the Night They Come For You: Bestselling author of The Fine Art of Invisible Detection
$26.39 $32.99