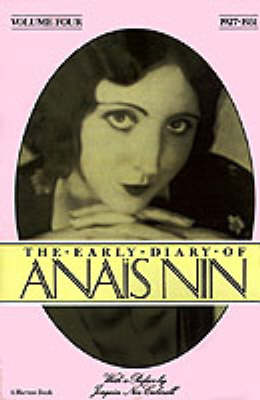 Culminating at the run-down villa in Louveciennes so closely associated with Henry Miller, this last volume of the early diaries provides a bridge between the early life of Anais Nin and the first volume of her now-famous Diary. Despite what she felt to be an "ideal" marriage to Hugo Guiler, Nin sensed a growing duality of body and mind and began a flirtation with American writer John Erskine. She also renewed her relationship with a handsome cousin, Eduardo Sanchez, partly in the hope he would cure her of Erskine. Sanchez introduced her to the work of Freud and Jung and shared her admiration of D. H. Lawrence. During this period Nin produced a perceptive study of Lawrence that became her first published book. She also experimented with stories, drawn largely from her diary. In pages more candid than in any of the preceding diaries, Nin reveals how she exercised the obsession that threatened her marriage and nearly drove her to suicide.

» Have you read this book? We'd like to know what you think about it - write a review about Early Diary of Anais Nin: 1927-1931 book by Anais Nin and you'll earn 50c in Boomerang Bucks loyalty dollars (you must be a Boomerang Books Account Holder - it's free to sign up and there are great benefits!)