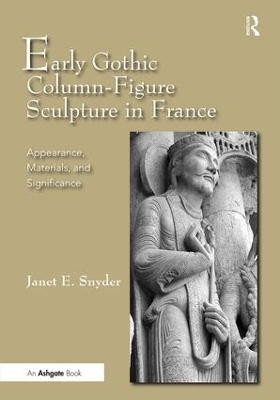 Richly illustrated, Early Gothic Column-Figure Sculpture in France is a comprehensive investigation of church portal sculpture installed between the 1130s and the 1170s. At more than twenty great churches, beginning at the Royal Abbey of Saint-Denis and extending around Paris from Provins in the east, south to Bourges and Dijon, and west to Chartres and Angers, larger than life-size statues of human figures were arranged along portal jambs, many carved as if wearing the dress of the highest ranks of French society. This study takes a close look at twelfth-century human figure sculpture, describing represented clothing, defining the language of textiles and dress that would have been legible in the twelfth-century, and investigating rationale and significance. The concepts conveyed through these extraordinary visual documents and the possible motivations of the patrons of portal programs with column-figures are examined through contemporaneous historical, textual, and visual evidence in various media. Appendices include analysis of sculpture production, and the transportation and fabrication in limestone from Paris. Janet Snyder's new study considers how patrons used sculpture to express and shape perceived reality, employing images of textiles and clothing that had political, economic, and social significances. » Have you read this book? We'd like to know what you think about it - write a review about Early Gothic Column-Figure Sculpture in France book by Janet E. Snyder and you'll earn 50c in Boomerang Bucks loyalty dollars (you must be a Boomerang Books Account Holder - it's free to sign up and there are great benefits!)

A Preview for this title is currently not available.
More Books By Janet E. Snyder
View All