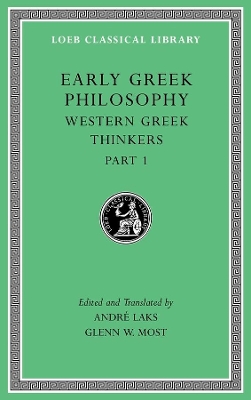 The fragments and testimonia of the early Greek philosophers (often known as the pre-Socratics) have always been not only a fundamental source for understanding archaic Greek culture and ancient philosophy but also a perennially fresh resource that has stimulated Western thought until the present day. This new systematic conception and presentation of the evidence differs in three ways from Hermann Diels s groundbreaking late-nineteenth-century work as well as from later editions: it renders explicit the material s thematic organization; it includes a selection from such related bodies of evidence as archaic poetry, classical drama, and the Hippocratic corpus; and it presents an overview of the reception of these thinkers until the end of antiquity.

Volume I presents an introduction, preliminary chapters on ancient doxography, the cosmological and moral background, and the Ionian thinkers from Pherecydes to Heraclitus. Volume II presents western Greek thinkers from the Pythagoreans to Hippo. Volume III presents later philosophical systems and their aftermath in the fifth and early fourth centuries, from Anaxagoras through the Derveni papyrus. Volume IV presents fifth-century reflections on language, rhetoric, ethics, and politics (the so-called sophists and Socrates) and concludes with an appendix on philosophy and philosophers in tragedy and comedy, concordances, and indexes."

» Have you read this book? We'd like to know what you think about it - write a review about Early Greek Philosophy, Volume IV: Western Greek Thinkers, Part 1 book by Andre Laks and you'll earn 50c in Boomerang Bucks loyalty dollars (you must be a Boomerang Books Account Holder - it's free to sign up and there are great benefits!)


A Preview for this title is currently not available.
More Books By Andre Laks
View All

The Concept of Presocratic Philosophy: Its Origin, Development, and Significance
$39.19 $39.99