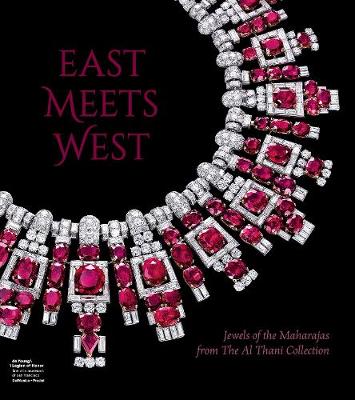 East Meets West: Jewels of the Maharajas from the Al Thani Collection

Description - East Meets West: Jewels of the Maharajas from the Al Thani Collection by Martin Chapman

This stunning book focuses on four centuries of magnificent jewellery that resulted from the cultural exchange between India and Europe. From the dawn of the Mughal Empire through the end of the British Raj, exquisite pieces of jewelry from or inspired by India traveled between Europe and Asia. This book features more than 150 objects, including jewel-encrusted jades, famous gemstones, enameled gold, and other precious works of art that range in date from the 17th century to the 1930s, along with exquisite contemporary examples by JAR and Baghat that draw from earlier motifs. Between the 16th and 19th centuries, Indian jewellery and works of art developed Persian and Muslim influences brought over by the Mughal Empire while European styles and craftsmanship traveled to India via the British Raj. As illustrated in this elegant book, 20th-century influences flowed in the opposite direction when Indian jewellery inspired European designers to make pieces in the Indian style. East Meets West also showcases the significant role that gender played, as Indian men adorned themselves with treasures worn exclusively by women in Europe. With fascinating essays and beautiful photographs, this book illustrates the cultural and artistic conversations that resulted in some of the most gorgeous jewellery ever created. AUTHOR: Martin Chapman is Curator of European Decorative Arts and Sculpture at the Fine Arts Museums of San Francisco. His most recent books are The Sculpture of Auguste Rodin at the Legion of Honor and Breguet: Art and Innovation in Watchmaking (both by Prestel). 350 colour illustrations

» Have you read this book? We'd like to know what you think about it - write a review about East Meets West: Jewels of the Maharajas from the Al Thani Collection book by Martin Chapman and you'll earn 50c in Boomerang Bucks loyalty dollars (you must be a Boomerang Books Account Holder - it's free to sign up and there are great benefits!)


A Preview for this title is currently not available.
More Books By Martin Chapman
View All