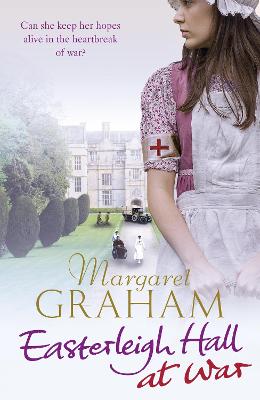 The second novel in a compelling new series set in County Durham just before and during the First World War.

The second novel in a compelling new series set in County Durham just before and during the First World War.

England is at war and Easterleigh Hall has been turned into a hospital for the duration of the hostilities.

With its army of volunteers and wounded servicemen, cook Evie Forbes is determined that everyone will be properly provided for, despite the threat of rationing and dwindling supplies.

All the while she waits for letters from her fiance and beloved brother, fighting on the Western Front.

Then the worst happens - a telegram arrives with shattering news. And Evie wonders if she'll have the strength to carry on...

» Have you read this book? We'd like to know what you think about it - write a review about Easterleigh Hall at War book by Margaret Graham and you'll earn 50c in Boomerang Bucks loyalty dollars (you must be a Boomerang Books Account Holder - it's free to sign up and there are great benefits!)

Margaret Graham has been writing for thirty years. Her first novel was published in 1986 and she is now working on her sixteenth. As a bestselling author her novels have been published in the UK, Europe and the USA. Margaret has written two plays, co-researched a television documentary which grew out of Canopy of Silence - and numerous short stories and features. She is Contributing Editor for Frost Magazine, and is also a writing tutor and speaker. She founded the Yeovil Literary Prize and now that she lives in High Wycombe she has launched and runs the charity Words for the Wounded. WforW raises funds for the recovery of wounded troops by donations, LitFests and the Independent Author Book Award writing prize. She has he who must be disobeyed , four children and three grand-children who think OAP stands for Old Ancient Person. They have yet to understand the politics of pocket money. Margaret is a member of the WI, her local U3A. She does Tai Chi, and eats too much. For more information about Margaret Graham, visit her website at www.margaret-graham.com and www.wordsforthewounded.co.uk

A Preview for this title is currently not available.
More Books By Margaret Graham
View All