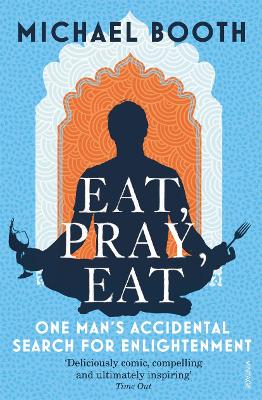 A book dedicated to all those approaching middle age, confronting dispiriting, irreversible physical decline, plagued by a gnawing sense of mortality, and frittering their time away on distractions, regrets and and thwarted ambition...

World-weary, distracted and more often than not the worse for wine, Michael Booth really needed to make some major changes to his life. Instead, he embarks on an over-ambitious, self-indulgent attempt to write the definitive book on Indian food, taking his wife and two young children in tow.

They criss-cross India, from mist-shrouded Delhi to Mumbai and the slums of Dharavi, meeting the locals and samplying different cuisines along the way. However, his plan is derailed as he spirals deeper into his metaphysical middle-aged malaise, finally unravelling amid the sweltering heat of the Keralan backwaters.

Fortunately, his wife takes control and enrolls her disintegrating husband in a hardcore yoga boot camp, enlisting a wise meditation guru who helps him chart a path towards enlightenment. But will Booth's cynicism and untrammelled appetites prove his undoing? Can he regain his balance, conquer his anxieties and face up to life as a husband and father?

» Have you read this book? We'd like to know what you think about it - write a review about Eat Pray Eat book by Michael Booth and you'll earn 50c in Boomerang Bucks loyalty dollars (you must be a Boomerang Books Account Holder - it's free to sign up and there are great benefits!)

Michael Booth is a journalist and food writer who contributes regularly to numerous British and foreign magazines, including Conde Nast Traveller and Monocle, and has written for all of the UK's broadsheet newspapers. He is the author of three works of non-fiction, Just as Well I'm Leaving, Doing Without Delia, which was a BBC Radio 4 'Book of the Week', and Sushi and Beyond, which won the Guild of Food Writers Kate Whiteman Award for the best book on food and travel in 2010.

Three Tigers, One Mountain: A Journey through the Bitter History and Current Conflicts of China, Korea and Japan
$28.00 $35.00