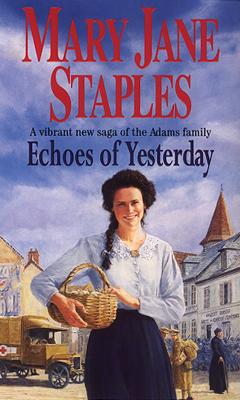 Echoes Of Yesterday: A Novel of the Adams Family Saga

Description - Echoes Of Yesterday: A Novel of the Adams Family Saga by Mary Jane Staples

It was June 1916 when Sergeant Boots Adams of the Royal West Kents, together with his men, was billeted on the Descartes farm in Northern France. It was a short break from the turmoil and horror of the trenches, and Boots and his men, in return for their free billeting, were to help the farmer in his fields. It came as something of a surprise to discover that the land was being managed by a young French war widow, Cecile Lacoste and, to the distant sound of guns, a brief wartime friendship flared between Boots and Cecile. The friendship was cut brutally short when, once more, the West Kents were called back to the trenches and Boots suffered an injury that was to take him home to London, to Sammy and Chinese Lady, and all the valiant cockney friends of Walworth who were to help him through the darkest period of his life. It was to be many years before Boots' friend, Miss Polly Simms, visiting the old battle haunts of France, stumbled once more upon the Descartes farm, and the memories of the past were rekindled.

Book Reviews - Echoes Of Yesterday: A Novel of the Adams Family Saga by Mary Jane Staples

» Have you read this book? We'd like to know what you think about it - write a review about Echoes Of Yesterday: A Novel of the Adams Family Saga book by Mary Jane Staples and you'll earn 50c in Boomerang Bucks loyalty dollars (you must be a Boomerang Books Account Holder - it's free to sign up and there are great benefits!)


A Preview for this title is currently not available.
More Books By Mary Jane Staples
View All