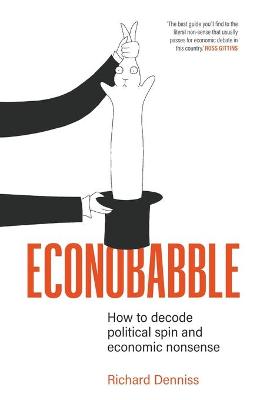 Econobabble: How to Decode Political Spin and Economic Nonsense

Description - Econobabble: How to Decode Political Spin and Economic Nonsense by Richard Denniss

A fully updated and expanded edition of Richard Denniss's clear, witty guide to understanding political jargon about the economy.

'Economics is like a tyre lever- it can be used to solve a problem, or to beat someone over the head.'

What is econobabble? We hear it every day, when politicians and commentators use incomprehensible economic jargon to dress up their self-interest as the national interest, to make the absurd seem inevitable or the inequitable seem fair. This book exposes the stupid arguments, bizarre contradictions and complete lack of evidence upon which much 'common sense' about the economy rests in Australia.

Econobabble is for those who, deep down, have never believed that it makes sense, economic or otherwise, to help poor people by slashing public spending on the services they need. It's for those who have a sneaking suspicion that it would be cheaper to avoid the effects of climate change than to let them happen and then 'adapt'. And it's for those who think pitting public health and aged care against the economy is a false dilemma, one that's short-sighted, callous and potentially dangerous.

In this new edition, Richard Denniss demolishes the tired and misleading arguments of right-wing economic 'experts' with humour and precision, empowering you to cut through the babble and reach the truth.

» Have you read this book? We'd like to know what you think about it - write a review about Econobabble: How to Decode Political Spin and Economic Nonsense book by Richard Denniss and you'll earn 50c in Boomerang Bucks loyalty dollars (you must be a Boomerang Books Account Holder - it's free to sign up and there are great benefits!)


A Preview for this title is currently not available.
More Books By Richard Denniss
View All