Clear writing is the key to clear thinking. So think what you want to say, then say it as simply as possible.

That's the thinking that underpins this much-loved guide, and the mantra for anyone wanting to communicate with the clarity, style and precision for which The Economist is renowned.

The Economist Style Guide guides the reader through the pleasures and pitfalls of English usage. It offers advice on the consistent use of punctuation, abbreviations and capital letters, identifies common errors and cliches and contains an exhaustive range of reference material - covering everything from business ratios to mathematical symbols and common Latin phrases. It also tackles the key differences between British and American English.

But this is no ordinary guide to English usage. It has a wit, verve and flair which make it much more than a simple work of reference. Here are just some examples:

- anticipate does not mean expect. Jack and Jill expected to marry; if they anticipated marriage, only Jill might find herself expectant.
- Take care with between. To fall between two stools, however painful, is grammatically acceptable. To fall between the cracks is to challenge the laws of physics.
- critique is a noun. If you want a verb, try criticise.
- use words with care. If This door is alarmed, does its hair stand on end?

The Economist Style Guide is required reading for anyone who wants to communicate with style. 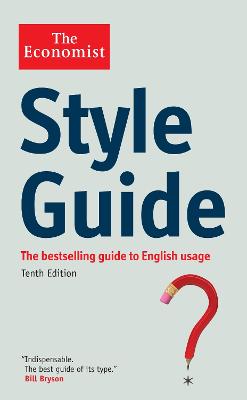 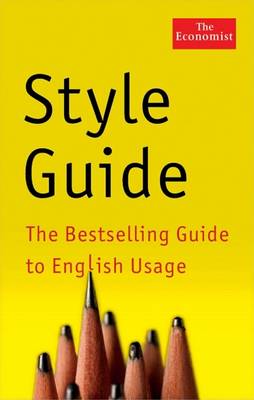 » Have you read this book? We'd like to know what you think about it - write a review about Economist Style Guide book by The Economist and you'll earn 50c in Boomerang Bucks loyalty dollars (you must be a Boomerang Books Account Holder - it's free to sign up and there are great benefits!)

Ann Wroe is the Obituaries Editor of The Economist. After taking a first-class degree in History and a doctorate in medieval history (Oxford, 1975) she worked at the BBC World Service, covering French and Italian politics. She joined The Economist in 1976 to cover American politics, and has held the posts of Books and Arts editor (1988-1992) and US editor (1992-2000). She has edited the Obituaries page, usually writing the obituaries herself, since October 2003. She lives in London.

A Preview for this title is currently not available.
More Books By The Economist
View All