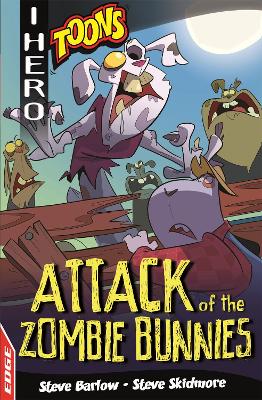 EDGE: I HERO: Toons: Attack of the Zombie Bunnies

Description - EDGE: I HERO: Toons: Attack of the Zombie Bunnies by Steve Barlow

Take on the role of a cartoon hero in this fully interactive, wacky, choose-your-own-destiny adventure story.YOU live in a small, dull town with your ma and pa, and while they are perfectly happy growing fruit and veg for the ever-expanding population, YOU want more than this sedate, rural life. That'll be when the zombie bunnies start popping up all over the place...Written by the award-winning duo Steve Barlow and Steve Skidmore, and illustrated by the amazing Lee Robinson.Age appropriate for 6 to 8 year olds. Also suitable for reluctant readers and less confident older readers. Printed using a font approved by the British Dyslexia Association.

» Have you read this book? We'd like to know what you think about it - write a review about EDGE: I HERO: Toons: Attack of the Zombie Bunnies book by Steve Barlow and you'll earn 50c in Boomerang Bucks loyalty dollars (you must be a Boomerang Books Account Holder - it's free to sign up and there are great benefits!)

Steve Barlow was born in Britain (in Crewe, in the county of Cheshire). He went to Brierley Street School, which was like Bash Street only not as sophisticated, then to Crewe County Grammar School for Boys (and what kind of school feels the need, in its name, to remind its pupils what gender they are? Hmmm?). He went on to study at Warwick University and Nottingham University, and worked at various times as a teacher, actor, stage manager and puppeteer. Then he went to teach in Botswana, where a valid excuse for students not handing in their homework was \'A goat ate it, sir!\'. On his return to the UK he met Steve Skidmore, and the rest is hysteria. Steve Skidmore is shorter than Steve Barlow and less hairy. He was born in Birstall near Leicester in England. After managing to pass some exams at school, he went on to Nottingham University to supposedly read English, but spent most of his time playing sport and doing a variety of summer jobs including counting pastry pie lids (yes, really). He trained as a teacher of Drama, English and Film studies, before teaming up with Steve Barlow to become a full time author. He lives in Leicester and is a great rugby fan (he supports Leicester Tigers - \'Come on you Tiiiiigeeeers!\').