The advances made in vascular biology in the last 25 years have considerably changed the perception that one could have of the endothelial cells. Once considered as a diffusion barrier preventing the access of the blood cells to the vascular matrix, the endothelium is now recognized as playing a major role in the control of blood fluidity, platelet aggregation, and vascular tone, but also in immunology, inflammation, angiogenesis, and for serving as a metabolizing and an endocrine organ.

Cardiovascular diseases, so prevalent in the Western world during the twentieth century, could well become the scourge of the twenty-first century in emerging countries as well as the West. Endothelial dysfunction linked to an imbalance in the synthesis and/or release of contracting and relaxing factors is often evoked to explain the initiation of the cardiovascular pathology or its development and perpetuation. Two decades ago, when nitric oxide was demonstrated to mediate endothelium-dependent relaxations, the vascular world seemed convinced that nitric oxide was the ultimate and sole explanation for such relaxations. However not everyone agreed.

EDHF: The Complete Story is the work of two leading researchers who did not accept that simple conclusion, but instead continued to search, along with others, for a deeper understanding of the ways in which endothelial cells communicate with the underlying smooth muscle to signal it to hyperpolarize. Now with most, if not all, of those ways, uncovered, the authors offer this summary as way of bringing closure to the quest.

This monograph reports on the work of many researchers. It summarizes the significant recent discoveries concerning endothelium-dependent hyperpolarizations, which are likely to play a much more important role in cardiovascular physiology and pathology than was originally foreseen

Extensively illustrated with original diagrams and schematics that su

Other Editions - EDHF: The Complete Story by Michel Feletou 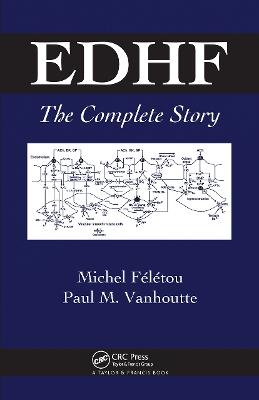 » Have you read this book? We'd like to know what you think about it - write a review about EDHF: The Complete Story book by Michel Feletou and you'll earn 50c in Boomerang Bucks loyalty dollars (you must be a Boomerang Books Account Holder - it's free to sign up and there are great benefits!)

A Preview for this title is currently not available.
More Books By Michel Feletou
View All