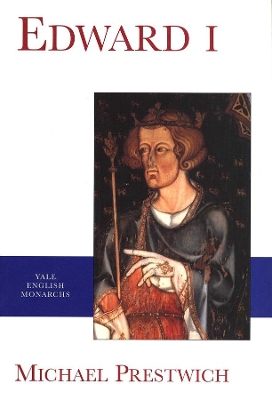 Description - Edward I by Michael Prestwich

Edward I?one of the outstanding monarchs of the English Middle Ages?pioneered legal and parliamentary change in England, conquered Wales, and came close to conquering Scotland. A major player in European diplomacy and war, he acted as peacemaker during the 1280s but became involved in a bitter war with Philip IV a decade later. This book is the definitive account of a remarkable king and his long and significant reign. Widely praised when it was first published in 1988, it is now reissued with a new introduction and updated bibliographic guide.

Praise for the earlier edition:

"A masterly achievement. . . . A work of enduring value and one certain to remain the standard life for many years."?Times Literary Supplement

"A fine book: learned, judicious, carefully thought out and skillfully presented. It is as near comprehensive as any single volume could be."?History Today

"To have died more revered than any other English monarch was an outstanding achievement; and it is worthily commemorated by this outstanding addition to the . . . corpus of royal biographies."?Times Education Supplement

» Have you read this book? We'd like to know what you think about it - write a review about Edward I book by Michael Prestwich and you'll earn 50c in Boomerang Bucks loyalty dollars (you must be a Boomerang Books Account Holder - it's free to sign up and there are great benefits!)

Michael Prestwich is Pro-Vice-Chancellor and Professor of History at the University of Durham. He is the author of Armies and Warfare in the Middle Ages (1996), also published by Yale University Press.