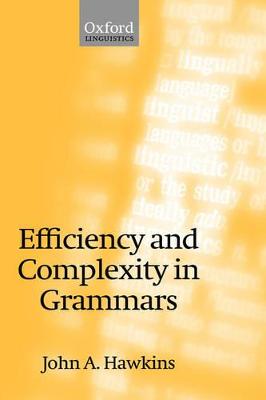 Efficiency and Complexity in Grammars

Description - Efficiency and Complexity in Grammars by John A. Hawkins

This book addresses a question fundamental to any discussion of grammatical theory and grammatical variation: to what extent can principles of grammar be explained through language use? John A. Hawkins argues that there is a profound correspondence between performance data and the fixed conventions of grammars. Preferences and patterns found in the one, he shows, are reflected in constraints and variation patterns in the other. The theoretical consequences of the proposed 'performance-grammar correspondence hypothesis' are far-reaching -- for current grammatical formalisms, for the innateness hypothesis, and for psycholinguistic models of performance and learning. Drawing on empirical generalizations and insights from language typology, generative grammar, psycholinguistics, and historical linguistics, Professor Hawkins demonstrates that the assumption that grammars are immune to performance is false.

Other Editions - Efficiency and Complexity in Grammars by John A. Hawkins 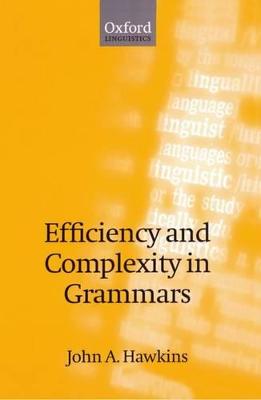 Book Reviews - Efficiency and Complexity in Grammars by John A. Hawkins

» Have you read this book? We'd like to know what you think about it - write a review about Efficiency and Complexity in Grammars book by John A. Hawkins and you'll earn 50c in Boomerang Bucks loyalty dollars (you must be a Boomerang Books Account Holder - it's free to sign up and there are great benefits!)

John A. Hawkins completed his PhD at Cambridge University in 1975. He has held positions at the University of Essex, the Max-Planck-Institute for Psycholinguistics, and the University of Southern California. In 2003 he was elected to a chair at Cambridge. His visiting appointments include UCLA, Berkeley, Potsdam, and the Max-Planck-Institute for Evolutionary Anthropology. He has research interests in linguistics and cognitive science and has published books and articles on typology and universals, syntax and grammatical theory, and psycholinguistics and historical linguistics. Recently, his particular focus has been the relationship between principles of language use and grammars. His books include A Performance Theory of Order and Constituency (Cambridge, 1994); A Comparative Typology of English and German (Austin, 1986) Word Order Universals (New York, 1983), Definiteness, and Indefiniteness: A Study in Reference and Grammaticality Prediction (London, 1978).