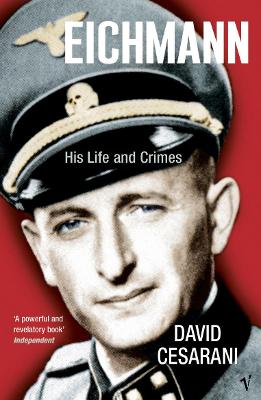 His Life and Crimes

'A gripping and sophisticated biography, of the best I have seen of a major Nazi' Evening Standard

Adolf Eichmann was at the centre of the Nazi genocide against the Jews of Europe between 1941 and 1945. He was directly responsible for transporting over 2 million Jews to their deaths in Auschwitz-Birkenau and other death camps. Yet he was an obscure figure until his sensational capture by the Israeli Secret Service in Argentina in 1960 and his subsequent trial in Jerusalem. This study is the first account of Eichmann's life to appear since the aftermath of his trial. It is a groundbreaking biography of one of the most fascinating of the Nazi leaders. Drawing on recently unearthed documents, David Cesarani shows how Eichmann became the Nazi Security Service's 'expert' on Jewish matters and reveals his initially cordial working relationship with Zionist Jews in Germany, despite his intense anti-Semitism. He explains how new research demonstrates that the massive ethnic cleansing Eichmann conducted in Poland in 1939-40 was the crucial bridge to his role in the deportation of the Jews. And Cesarani argues controversially that Eichmann was not necessarily predisposed to mass murder, exploring the remarkable, largely unknown period in Eichmann's career when he learned how to become a perpetrator of genocide.

» Have you read this book? We'd like to know what you think about it - write a review about Eichmann book by Dr David Cesarani and you'll earn 50c in Boomerang Bucks loyalty dollars (you must be a Boomerang Books Account Holder - it's free to sign up and there are great benefits!)

David Cesarani is Professor of Modern Jewish History at the University of Southampton. His publications include Arthur Koestler- The Homeless Mind.

A Preview for this title is currently not available.
More Books By Dr David Cesarani
View All