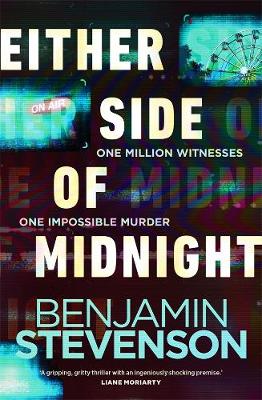 Either Side of Midnight

Description - Either Side of Midnight by Benjamin Stevenson

'Either Side of Midnight is a gripping, gritty thriller with an ingeniously shocking premise and twists and turns you'll never see coming!' Liane Moriarty, bestselling author of Big Little Lies

'A complex and hugely original page-turner. Stevenson has officially made my auto-buy-author list.' Christian White, bestselling author of The Nowhere Child

How can it be murder when the victim pulled the trigger?

At 9.01 pm, TV presenter Sam Midford delivers the monologue for his popular current affairs show Midnight Tonight. He seems nervous and the crew are convinced he's about to propose to his girlfriend live on air.

Instead, he pulls out a gun and shoots himself in the head.

Sam's grief-stricken twin Harry is convinced his brother was murdered. But how can that be, when one million viewers witnessed Sam pull the trigger?

Only Jack Quick, a disgraced television producer in the last days of a prison sentence, is desperate enough to take Harry's money to investigate.

But as Jack starts digging, he finds a mystery more complex than he first assumed. And if he's not careful, he'll find out first-hand that there's more than one way to kill someone . . .

'The male relationships in Either Side of Midnight are layered in a way that transcends the crime genre. Funny, disturbing and unpredictable.' Jack Heath, bestselling author of Hangman

'Either Side of Midnight, which trips between light and dark, city and country, and twists the reader into knots, is for fans of solid Australian crime authors like Chris Hammer, Christian White and Candice Fox.' Books and Publishing

'A gripping thriller.' Who Weekly

'Stevenson writes solid Australian crime thrillers with a command of psychology and suspense and a dark comic edge. That the series extends its tendrils into satire - it neatly skewers the culture of our television industry - only adds to its appeal.' The Age

Buy Either Side of Midnight by Benjamin Stevenson from Australia's Online Independent Bookstore, Boomerang Books.

Book Reviews - Either Side of Midnight by Benjamin Stevenson

» Have you read this book? We'd like to know what you think about it - write a review about Either Side of Midnight book by Benjamin Stevenson and you'll earn 50c in Boomerang Bucks loyalty dollars (you must be a Boomerang Books Account Holder - it's free to sign up and there are great benefits!)


A Preview for this title is currently not available.
More Books By Benjamin Stevenson
View All