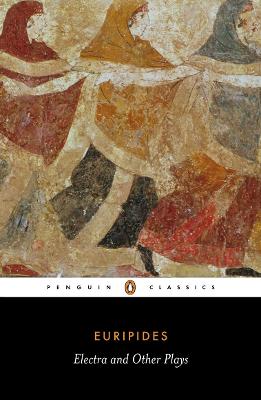 Electra and Other Plays

Description - Electra and Other Plays by Euripides

Of all the ancient Greek tragedians, Euripides was the most sensitive to the lives of women and other outcasts in Athenian society, and Electra and Other Plays collects five plays demonstrating his talent for bringing to life their plight. This Penguin Classics edition is translated by John Davie with an introduction and notes by Richard Rutherford.
Written during a period overshadowed by the fierce struggle for supremacy between Sparta and Euripides' native Athens, these five plays are haunted by the shadow of war - and in particular its impact on women. In Electra the children of Agamemnon take bloody revenge on their mother for murdering their father after his return from Troy, and Suppliant Women depicts the grieving mothers of those killed in battle. The other plays deal with the aftermath of the Trojan War for the defeated survivors, as Andromache shows Hector's widow as a trophy of war in the house of her Greek captor, and Hecabe portrays a defeated queen avenging the murder of her last-remaining son, while Trojan Women tells of the plight of the city's women in the hands of their victors.
John Davie's compelling translations are accompanied by an introduction by Richard Rutherford describing the tragic genre and Euripides innovations, along with a chronology, prefaces to each play, notes, a bibliography and a glossary of names.
Euripides (c.485-07 BC) was an Athenian born into a family of considerable rank. Disdaining the public duties expected of him, Euripides spent a life of quiet introspection, spending much of his life in a cave on Salamis. Late in life he voluntarily exiled himself to the court of Archelaus, King of Macedon, where he wrote The Bacchae, regarded by many as his greatest work. Euripides is thought to have written 92 plays, only 18 of which survive.
If you enjoyed Electra and Other Plays, you might like Euripides' Medea and Other Plays, also available in Penguin Classics.
'The most intensely tragic of all the poets'
Aristotle

Other Editions - Electra and Other Plays by Euripides Book Reviews - Electra and Other Plays by Euripides

» Have you read this book? We'd like to know what you think about it - write a review about Electra and Other Plays book by Euripides and you'll earn 50c in Boomerang Bucks loyalty dollars (you must be a Boomerang Books Account Holder - it's free to sign up and there are great benefits!)


A Preview for this title is currently not available.
More Books By Euripides
View All