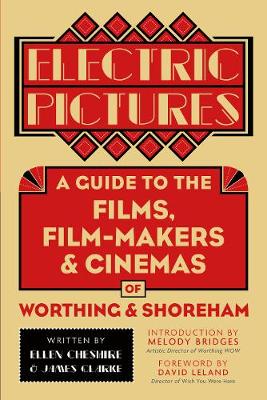 A Guide to the Films, Film-Makers & Cinemas of Worthing & Shoreham

120 years of film in Sussex is celebrated, commemorated and chronicled in this exclusive book Written as part of the Worthing WOW festival celebrations, Electric Pictures commemorates 120 years of film in the Sussex coastal towns of Worthing and Shoreham, capturing the region's rich cinematic legacy and its place in British film history. From filmmaking pioneers through to blockbuster films and key events in the film history of the coast, this volume draws on research from film archives and local history resources to tell the story of the south coast film world. Richly illustrated and featuring contributions from local historians and film and theatre specialists, the book also includes an additional Heritage Trail guide that indicates key filming locations and cinemas (both lost and surviving) in the towns today. AUTHOR: Ellen Cheshire has a degree in English and Film from the University of North London and has taught film and media at the University of Chichester and Chichester College. She is the author of numerous books and articles on filmmaking and has contributed chapters to books on James Bond and Charlie Chaplin, Silent Film and Counterculture, and war movies. In 2016 she was the official Film Historian on Worthing WOW's 120 Years of Film in Sussex project, of which this book is part. James Clarke has a degree in Film and Literature and has taught Film Studies as the University of Warwick, UCS Suffolk and the University of Essex. As a film journalist he writes regularly for specialist film magazines. He is currently working on a feature screenplay with a British animation studio. SELLING POINTS: Draws on research into press archives, film archives and local history resources to tell the story of the south coast film world Compiled by two expert film historians Compiled as part of Worthing WOW's celebration of 120 years of Film in Sussex 60 b/w illustrations

» Have you read this book? We'd like to know what you think about it - write a review about Electric Pictures book by Ellen Cheshire and you'll earn 50c in Boomerang Bucks loyalty dollars (you must be a Boomerang Books Account Holder - it's free to sign up and there are great benefits!)


A Preview for this title is currently not available.
More Books By Ellen Cheshire
View All