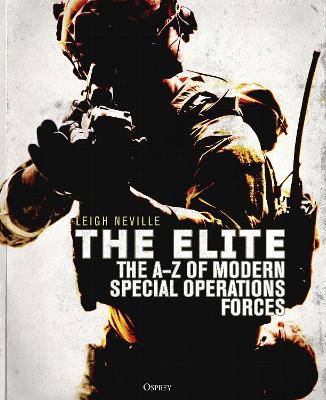 The Elite: The A-Z Encyclopedia of Modern Special Operations Forces

Using rare and previously unpublished images from around the world, The Elite: The A-Z of Modern Special Operations Forces is the ultimate guide to the secretive world of modern special operations forces. It sends the reader back in time to operations such as Eagle Claw in Iran and the recapture of the Iranian Embassy in London and then forward to recent operations against al-Shabaab and Islamic State. Entries also detail units ranging from the New Zealand SAS Group to the Polish GROM, and key individuals from Iraq counter-terrorism strategist General Stanley McChrystal to Victoria Cross recipient SASR Corporal Mark Donaldson.

Answering questions such as how much the latest four-tube night vision goggles worn by the SEALs in Zero Dark Thirty cost, which pistol is most widely employed by special operators around the world and why, and if SOF still use HALO jumps, this book is the definitive single-source guide to the world's elite special forces.

» Have you read this book? We'd like to know what you think about it - write a review about Elite: The A-Z Encyclopedia of Modern Special Operations Forces book by Leigh Neville and you'll earn 50c in Boomerang Bucks loyalty dollars (you must be a Boomerang Books Account Holder - it's free to sign up and there are great benefits!)

Leigh Neville is an Australian national who has written a number of books on both modern conventional military units and special operations forces serving in Afghanistan and Iraq, their weapons and their vehicles including six titles for Osprey with several more in development. He has also consulted on military topics for several wargame companies and television documentary makers. He lives in Sydney with his wife and two dogs. He can be contacted via his website at www.leighneville.com.