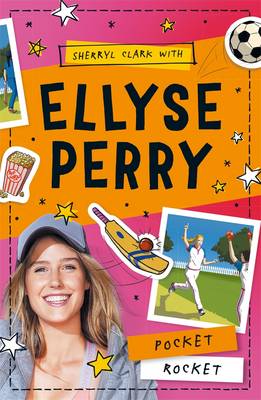 All Ellyse wants to do is play sport. Cricket, soccer, touch footy, athletics - you name it! But now that she's in high school, playing sport and having fun doesn't seem so simple. For starters, there's more homework, and a mix-up with her electives has her stuck with debating! Ugh. Then her friends, Jazz and Charlie, don't invite her when they go rollerskating. To top it off, mean Ms Parkes won't let her on the school cricket team because she thinks Ellyse is too small. Could life be more unfair?

Luckily, she still has club cricket. Her team are a sure bet to make the grand final, and Ellyse can't wait to get out onto the pitch with her mate Jamie.

Will Ellyse be able to handle the challenges of high school and still find time for all her sports?

» Have you read this book? We'd like to know what you think about it - write a review about Ellyse Perry 1 book by Ellyse Perry and you'll earn 50c in Boomerang Bucks loyalty dollars (you must be a Boomerang Books Account Holder - it's free to sign up and there are great benefits!)

Ellyse Perry (Author) At only 25 years of age, Ellyse Perry holds the rare distinction of being a dual international, having represented Australia in cricket and football (soccer). Ellyse made her debut for both the Australian cricket and association football teams at the age of 16 - the youngest person to represent Australia in cricket and the first Australian to have appeared in both cricket and association football World Cups. Since then, both her cricket and football careers have flourished. Ellyse was part of the Southern Stars cricket team that took out the 2015 Women's Ashes, and was named Player of the Ashes. During the summer, she plays for both the NSW Breakers in the Women's National Cricket League and Sydney FC in the W-League. Off the field, Ellyse can be found attending to her role as one of Cricket Australia's National Female Cricket ambassadors, plus ambassador roles for Commonwealth Bank, FOX Sports, Red Bull, Adidas, SportsMed and SCG Trust. She does philanthropic work with the LBW Trust and McGrath Foundation. In addition to this, she is also studying for a Bachelor of Economic and Social Sciences at Sydney University. Ellyse describes herself as an admirer of scenery and avid wanderer, perennial cafe inhabitant, and sports enthusiast! Sherryl Clark (Author) Sherryl Clark's first children's book was The Too-Tight Tutu which was published in the Aussie Bites series in 1997. Since then she has published almost 70 children's books, including Sixth Grade Style Queen (Not!), Motormouth and Runaways. Sherryl is also the author of the Rose books in the Our Australian Girl series and Jimmy's War in the Do You Dare series. She has had two collections of poetry for adults published by Pariah Press - <