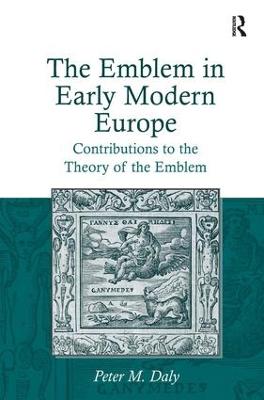 The Emblem in Early Modern Europe

Contributions to the Theory of the Emblem

The emblem was big business in early-modern Europe, used extensively not only in printed books and broadsheets, but also to decorate pottery, metalware, furniture, glass and windows and numerous other domestic, devotional and political objects. At its most basic level simply a combination of symbolic visual image and texts, an emblem is a hybrid composed of words and picture. However, as this book demonstrates, understanding the precise and often multiple meaning, intention and message emblems conveyed can prove a remarkably slippery process. In this book, Peter Daly draws upon many years' research to reflect upon the recent upsurge in scholarly interest in, and rediscovery of, emblems following years of relative neglect. Beginning by considering some of the seldom asked, but important, questions that the study of emblems raises, including the importance of the emblem, the truth value of emblems, and the transmission of knowledge through emblems, the book then moves on to investigate more closely-focussed aspects such as the role of mnemonics, mottoes and visual rhetoric. The volume concludes with a review of some perhaps inadequately considered issues such as the role of Jesuits (who had a role in the publication of about a quarter of all known emblem books), and questions such as how these hybrid constructs were actually read and interpreted. Drawing upon a database containing records of 6,514 books of emblems and imprese, this study suggests new ways for scholars to approach important questions that have not yet been satisfactorily broached in the standard works on emblems.

» Have you read this book? We'd like to know what you think about it - write a review about Emblem in Early Modern Europe book by Peter M. Daly and you'll earn 50c in Boomerang Bucks loyalty dollars (you must be a Boomerang Books Account Holder - it's free to sign up and there are great benefits!)

Peter M. Daly has degrees from universities in Bristol and Zurich and spent most of his university career in Canada. His research and publications have been largely on emblems and German baroque literature.

A Preview for this title is currently not available.
More Books By Peter M. Daly
View All