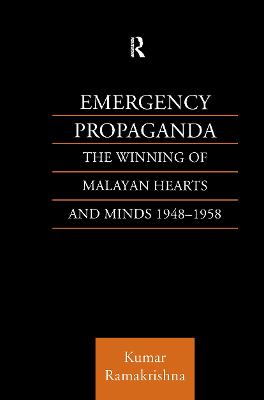 Despite the existence of numerous analyses of the eventual British success in the Malayan Emergency, the contribution of propaganda to the defeat of the Malayan Communist Party (MCP) has never been exhaustively scrutinized. This book fills the gap in the literature and sheds new light on the hitherto neglected years of the Emergency - 1955 to 1958 - demonstrating how British propaganda decisively ended the shooting war in December 1958. Essentially, the study breaks new ground by arguing for a concept of 'propaganda' that embraces not merely 'words' in the form of film, radio and leaflets but also 'deeds' such as the behaviour of Government representatives and certain official policies. It argues that for propaganda to be effective, the message transmitted by the propagandist's words must be congruent with that suggested by his actual deeds. Accordingly, the study shows that the MCP lost the support of the strategic rural Chinese community precisely because the Party's penchant for indiscriminate terror, especially in the early years, did not square with its rhetoric.
In contrast, it was the British, from 1952 onwards, who recognised that their deeds had to confirm what their leaflets and films were saying to the rural Chinese. Subsequently, they were able to gradually secure the confidence of the community, and ultimately, as the successful Merdeka Amnesty of 1957/58 showed, even of the terrorists, whose mass surrenders in 1958 all but ended the war. Scholars and students of war studies and of imperial history will find the work of considerable interest. 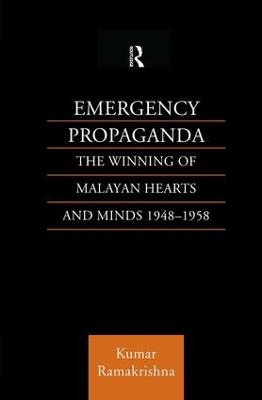 » Have you read this book? We'd like to know what you think about it - write a review about Emergency Propaganda book by Kumar Ramakrishna and you'll earn 50c in Boomerang Bucks loyalty dollars (you must be a Boomerang Books Account Holder - it's free to sign up and there are great benefits!)


A Preview for this title is currently not available.
More Books By Kumar Ramakrishna
View All