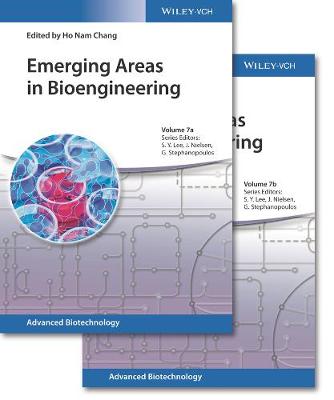 With more than 40 contributions from expert authors, this is an extensive overview of all important research topics in the field of bioengineering, including metabolic engineering, biotransformations and biomedical applications.

Alongside several chapters dealing with biotransformations and biocatalysis, a whole section is devoted to biofuels and the utilization of biomass. Current perspectives on synthetic biology and metabolic engineering approaches are presented, involving such example organisms as Escherichia coli and Corynebacterium glutamicum, while a further section covers topics in biomedical engineering including drug delivery systems and biopharmaceuticals. The book concludes with chapters on computer-aided bioprocess engineering and systems biology.

This is a part of the Advanced Biotechnology book series, covering all pertinent aspects of the field with each volume prepared by eminent scientists who are experts on the topic in question. Invaluable reading for biotechnologists and bioengineers, as well as those working in the chemical and pharmaceutical industries.

Biotechnology is a broad, interdisciplinary field of science, combining biological sciences and relevant engineering disciplines, that is becoming increasingly important as it benefits the environment and society as a whole. Recent years have seen substantial advances in all areas of biotechnology, resulting in the emergence of brand new fields. To reflect this progress, Sang-Yup Lee (KAIST, South Korea), Jens Nielsen (Chalmers University, Sweden), and Gregory Stephanopoulos (MIT, USA) have joined forces as the editors of a new Wiley-VCH book series. Advanced Biotechnology will cover all pertinent aspects of the field and each volume will be prepared by eminent scientists who are experts on the topic in question.

» Have you read this book? We'd like to know what you think about it - write a review about Emerging Areas in Bioengineering book by Ho Nam Chang and you'll earn 50c in Boomerang Bucks loyalty dollars (you must be a Boomerang Books Account Holder - it's free to sign up and there are great benefits!)

Ho Nam Chang is Professor Emeritus at the Department of Chemical and Biomolecular Engineering at the Korea Advanced Institute of Science and Technology (KAIST). He studied at Seoul National University (South Korea) and received his Master and Ph.D. degrees from Stanford University (USA) in 1971 and 1975. After this time, he returned to Korea and became Professor at KAIST, a position he hold until his retirement in 2010. In 1990, he was elected Director of the Bioprocess Engineering Research Center at KAIST. During his scientific career, Ho Nam Chang became a Humboldt Fellow at the University of Erlangen (Germany, 1980 to 1981), President of the Korean Society for Biotechnology and Bioengineering (1994 to 1995), Member of the Presidential Council on Science and Technology of Korea (1995 to 1997) and Honorary Professor at Nanjng University of Technology (China). Sang Yup Lee is Distinguished Professor at the Department of Chemical and Biomolecular Engineering at the Korea Advanced Institute of Science and Technology (KAIST). He is currently the Director of the Center for Systems and Synthetic Biotechnology, Director of the BioProcess Engineering Research Center, and Director of the Bioinformatics Research Center. He received numerous awards, including the National Order of Merit, the Merck Metabolic Engineering Award and the Elmer Gaden Award. Lee is the Editor-in-Chief of the Biotechnology Journal and Associate Editor and board member of numerous other journals. Lee is currently serving as a member of Presidential Advisory Committee on Science and Technology (Korea). Jens Nielsen has a PhD degree (1989) in Biochemical Engineering from the Danish Technical University (DTU), and after that established his independent research group and was appointed full Professor there in 1998. He was Fulbright visiting professor at MIT in 1995-1996. At DTU he founded and directed the Center for Microbial Biotechnology. In 2008 he was recruited as Professor and Director to Chalmers University of Technology, Sweden. Jens Nielsen has received numerous Danish and international awards including the Nature Mentor Award, and is member of several academies, including the National Academy of Engineering in USA and the Royal Swedish Academy of Science. He is a founding president of the International Metabolic Engineering Society. Professor Gregory Stephanopoulos is the W. H. Dow Professor of Chemical Engineering at the Massachusetts Institute of Technology (MIT, USA) and Director of the MIT Metabolic Engineering Laboratory. He is also Instructor of Bioengineering at Harvard Medical School (since 1997). He has been recognized by numerous awards from the American Institute of Chemical Engineers (AIChE) (Wilhelm, Walker and Founders awards), American Chemical Society (ACS), Society of industrial Microbiology (SIM), BIO (Washington Carver Award), the John Fritz Medal of the American Association of Engineering Societies, and others. In 2003 he was elected member of the National Academy of Engineering (USA) and in 2014 President of AIChE.