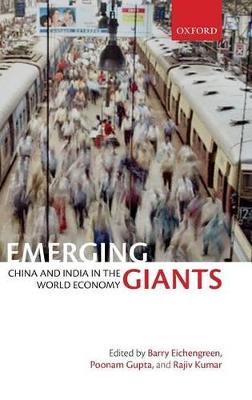 China and India in the World Economy

China and India are the two most populous countries in the world and now also two of the fastest growing. By sheer virtue of the fact that China and India are home to 2.4 billion people - two-fifths of the world's population - the rapid growth of their economies has far-reaching implications not just for global living standards and poverty reduction but also for competitiveness and distribution of income in the rest of the world. Commensurate with their
economic progress, there has been a surge of interest in the nature and implications of China and India's economic growth. There are several apparent similarities in the development
process of China and India: both are home to ancient civilizations that have bequeathed distinctive attitudes, institutions, and traditions. Both have very large populations. Both have performed well economically for more than two decades. However there are important differences that can be seen beneath the surface. China started the current reform process in 1978 - that is, almost fifteen years before India. The two countries have very different political systems. Their development models
differ fundamentally as well. China has opened up much more than India to foreign trade and foreign direct investment, while India has a better developed banking system. Growth in the two countries
has been driven by different sectors - Chinese growth by manufacturing and Indian growth by services. This volume brings together some of the best research on issues related to the growth experience of China and India and places these issues in a comparative perspective. It contains papers written by some of the leading academic and experts in the world on issues ranging from the roles of China and India in the world economy, contrasts in their development experience,
and challenges to sustaining growth.

» Have you read this book? We'd like to know what you think about it - write a review about Emerging Giants book by Barry Eichengreen and you'll earn 50c in Boomerang Bucks loyalty dollars (you must be a Boomerang Books Account Holder - it's free to sign up and there are great benefits!)

Barry Eichengreen is George C. Pardee and Helen N. Pardee Professor of Economics and Political Science at the University of California, Berkeley. He is also a research associate of the National Bureau of Economic Research and a research fellow at the Centre for Economic Policy Research (London). Dr. Eichengreen served as a senior policy advisor at the International Monetary Fund from 1997-98. A member of the Council on Foreign Relations, he has published widely on international monetary and financial affairs, including Financial Crises and What to Do About Them; Toward A New International Financial Architecture: A Practical Post-Asia Agenda; and Globalizing Capital: A History of the International Monetary System. Poonam Gupta is an Associate Professor at the Department of Economics, Delhi School of Economics, Delhi University. She has previously worked as an economist in the International Monetary Fund's Research Department, Asia and Pacific Department and the European Department. She has frequently consulted for the World Bank, International Monetary Fund and the Asian and Development Bank. She holds a PhD in Economics from the University of Maryland. Her research interests include issues related to financial crises, capital flows, financial sector, structural transformation and growth, and issues related to the Indian growth experience. Her work has been published in the leading academic journals and in collective volumes. Rajiv Kumar is Director and Chief Executive of the Indian Council for Research on International Economic Relations. Dr Kumar has been a Member of the National Security Advisory Board since August 2006 and member of the Telecom Regulatory Authority of India since January 2007. From August 2004 to January 2006, Dr. Kumar was Chief Economist with the Confederation of Indian Industry and worked with ADB, Manila for over 10 years as the Principal Regional Economist for Central Asia. He has written several books and contributes regularly to newspapers and journals.