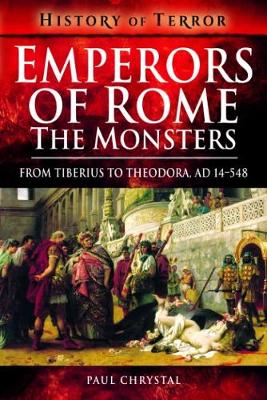 Emperors of Rome: The Monsters: From Tiberius to Elagabalus, AD 14-222

Description - Emperors of Rome: The Monsters: From Tiberius to Elagabalus, AD 14-222 by Paul Chrystal

As with everything else, there were good and bad Roman emperors. The good, like Trajan (98-117), Hadrian (117-138), Antoninus Pius (138-161) and Marcus Aurelius (161-180) were largely civilized and civilizing. The bad, on the other hand, were sometimes nothing less than monsters, exhibiting varying degrees of corruption, cruelty, depravity and insanity. It is a sobering thought that these ogres were responsible for governing the greatest civilization in the world, simultaneously terrorizing, brutalizing and massacring. Tiberius, Caligula, Nero, Domitian, Commodus, Caracella, Elagabalus, Septimius Severus, Diocletian, Maximinus Thrax, Justinian and Theodora all had more bad days than good; they are all covered in this book. Their exploits have, of course, been well documented since classical times but much of the coverage can only be called gratuitous, sensationalist or tabloid. This book is different because it is based on primary sources and evidence - and attempts to balance out the shocking with any mitigating aspects in each of their lives. Many of our monsters have some redeeming factors and it is important that these are exposed if a true record of their lives is to be conveyed. The book also examines how each of the twelve has been treated for posterity in literature, theatre and film, and the lessons intended to be drawn from popular culture through the ages. AUTHOR: Paul Chrystal is the author of some seventy books published over the last decade, including recent publications such as Wars and Battles of the Roman Republic, Roman Military Disasters and Women and War in Ancient Greece and Rome. He is a regular contributor to history magazines, local and national newspapers and has appeared on BBC Radio 4, BBC World Service and on BBC local radio throughout Yorkshire and in Teesside and Manchester. He writes extensively for several Pen & Sword military history series. 60 b/w illustrations

Book Reviews - Emperors of Rome: The Monsters: From Tiberius to Elagabalus, AD 14-222 by Paul Chrystal

» Have you read this book? We'd like to know what you think about it - write a review about Emperors of Rome: The Monsters: From Tiberius to Elagabalus, AD 14-222 book by Paul Chrystal and you'll earn 50c in Boomerang Bucks loyalty dollars (you must be a Boomerang Books Account Holder - it's free to sign up and there are great benefits!)


A Preview for this title is currently not available.
More Books By Paul Chrystal
View All

Lifeboat Stations of North East England From Sunderland to the Humber Through Time
$35.51 $39.46