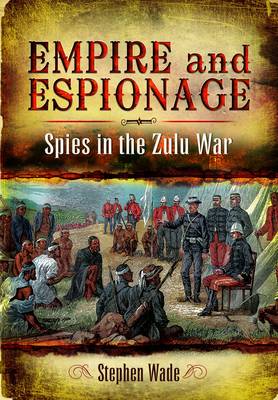 Spies in the Zulu War

The Anglo-Zulu War may be best remembered for the military blundering that led to the astonishing British defeat at Isandlwana, but as Stephen Wade shows in this book, military action throughout the war was supplemented by the actions of spies and explorers in the field, and was often heavily influenced by the decisions made by diplomats. Examining the roles of both spies and diplomats, the author looks at numerous influential figures in the conflict, including John Dunn, who fought with the British during the campaign, becoming ruler of part of Zululand after its conquest and even being presented to Queen Victoria. Diplomats include Sir Theophilus Shepstone, who was responsible for directing native affairs in Natal, and was so respected by the Zulus they called him Father . This unique and fascinating account of espionage and diplomacy in the nineteenth century demonstrates not only a side of warfare rarely considered in traditional histories of the period, but also gives examples of individuals who were able to earn the respect and trust of the native peoples, another rarely seen facet of the colonial period. AUTHOR: Stephen Wade is a professional writer specialising in regional crime, family heritage and nineteenth century history. He has written numerous books for Pen and Sword, most recently Britain's Most Notorious Hangmen, Tracing Your Police Ancestors and DNA Investigations. SELLING POINTS * A look at a neglected side of one of Britain's colonial wars * Shows the different sides of espionage, from spies in the field to diplomats. * Chronicles the exploits of several of the most famous spies in the Zulu War 30 illustrations

Other Editions - Empire and Espionage by Stephen Wade » Have you read this book? We'd like to know what you think about it - write a review about Empire and Espionage book by Stephen Wade and you'll earn 50c in Boomerang Bucks loyalty dollars (you must be a Boomerang Books Account Holder - it's free to sign up and there are great benefits!)


A Preview for this title is currently not available.
More Books By Stephen Wade
View All