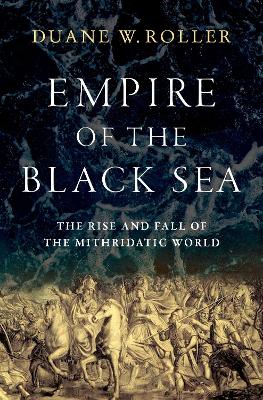 Empire of the Black Sea: The Rise and Fall of the Mithridatic World

Description - Empire of the Black Sea: The Rise and Fall of the Mithridatic World by Duane W. Roller

What is commonly called the kingdom of Pontos flourished for over two hundred years in the coastal regions of the Black Sea. At its peak in the early first century BC, it included much of the southern, eastern, and northern littoral, becoming one of the most important Hellenistic dynasties not founded by a successor of Alexander the Great. It also posed one of the greatest challenges to Roman imperial expansion in the east. Not until 63 BC, after many violent
clashes, was Rome able to subjugate the kingdom and its last charismatic ruler Mithridates VI.This book provides the first general history, in English, of this important kingdom from
its mythic origins in Greek literature (e.g., Jason and the Golden Fleece) to its entanglements with the late Roman Republic. Duane Roller presents its rulers and their complex relationships with the powers of the eastern Mediterranean and Near East, most notably Rome. In addition, he includes detailed discussions of Pontos' cultural achievements--a rich blend of Greek and Persian influences DL as well as its political and military successes, especially under Mithridates VI, who proved to be
as formidable a foe to Rome as Hannibal. Previous histories of Pontos have focused almost exclusively on the career of its last ruler. Setting that famous reign in its wide historical context, Empire of
the Black Sea is an engaging and definitive account of a powerful yet little-known ancient dynasty.

Buy Empire of the Black Sea: The Rise and Fall of the Mithridatic World by Duane W. Roller from Australia's Online Independent Bookstore, Boomerang Books.

Book Reviews - Empire of the Black Sea: The Rise and Fall of the Mithridatic World by Duane W. Roller

» Have you read this book? We'd like to know what you think about it - write a review about Empire of the Black Sea: The Rise and Fall of the Mithridatic World book by Duane W. Roller and you'll earn 50c in Boomerang Bucks loyalty dollars (you must be a Boomerang Books Account Holder - it's free to sign up and there are great benefits!)


A Preview for this title is currently not available.
More Books By Duane W. Roller
View All

The Geography of Strabo: An English Translation, with Introduction and Notes
$57.56 $63.95