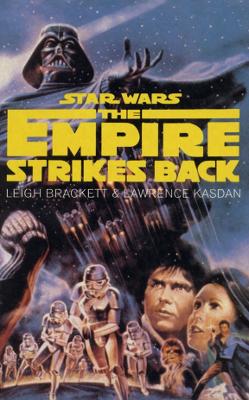 The Empire Strikes Back

Description - The Empire Strikes Back by George Lucas

Widely considered the darkest and most intriguing of the central Star Wars trilogy, The Empire Strikes Back deepens the exploration of mythic themes first essayed in A New Hope.

From its opening amid a besieged Rebel stronghold on the ice planet Hoth to its finale on Bespin, the floating city run by gambler Lando Calrissian, Empire charts Luke Skywalker's travails on the arduous path to becoming a Jedi Knight - a journey that culminates in a punishing face-off with Imperial warlord Darth Vader, and Luke's realisation of the dreadful truth about the fate which befell his father Anakin.

Derived from George Lucas's original story, the screenplay was composed by Leigh Brackett (veteran writer for Howard Hawks and Robert Altman) and Lawrence Kasdan (who soon afterwards established himself as a director with Body Heat and The Big Chill). Together, they produced a psychologically complex piece of epic storytelling, treasurably enhanced by the verbal jousting - and the affecting romance - between Han Solo and Princess Leia.

Book Reviews - The Empire Strikes Back by George Lucas

» Have you read this book? We'd like to know what you think about it - write a review about Empire Strikes Back book by George Lucas and you'll earn 50c in Boomerang Bucks loyalty dollars (you must be a Boomerang Books Account Holder - it's free to sign up and there are great benefits!)


A Preview for this title is currently not available.
More Books By George Lucas
View All