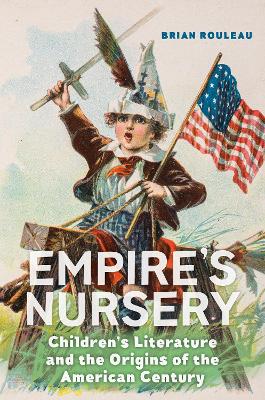 Empire's Nursery: Children's Literature and the Origins of the American Century

Description - Empire's Nursery: Children's Literature and the Origins of the American Century by Brian Rouleau

How children and children's literature helped build America's empire
America's empire was not made by adults alone. During the nineteenth and twentieth centuries, young people became essential to its creation. Through children's literature, authors instilled the idea of America's power and the importance of its global prominence. As kids eagerly read dime novels, series fiction, pulp magazines, and comic books that dramatized the virtues of empire, they helped entrench a growing belief in America's indispensability to the international order.
Empires more generally require stories to justify their existence. Children's literature seeded among young people a conviction that their country's command of a continent (and later the world) was essential to global stability. This genre allowed ardent imperialists to obscure their aggressive agendas with a veneer of harmlessness or fun. The supposedly nonthreatening nature of the child and children's literature thereby helped to disguise dominion's unsavory nature.
The modern era has been called both the "American Century" and the "Century of the Child." Brian Rouleau illustrates how those conceptualizations came together by depicting children in their influential role as the junior partners of US imperial enterprise.

Book Reviews - Empire's Nursery: Children's Literature and the Origins of the American Century by Brian Rouleau

» Have you read this book? We'd like to know what you think about it - write a review about Empire's Nursery: Children's Literature and the Origins of the American Century book by Brian Rouleau and you'll earn 50c in Boomerang Bucks loyalty dollars (you must be a Boomerang Books Account Holder - it's free to sign up and there are great benefits!)


A Preview for this title is currently not available.
More Books By Brian Rouleau
View All