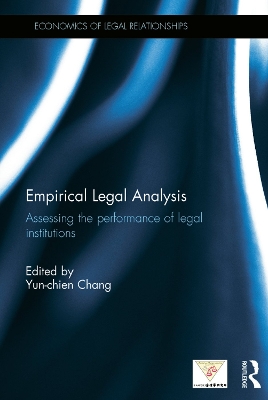 Assessing the performance of legal institutions

This innovative volume explores empirical legal issues around the world. While legal studies have traditionally been worked on and of letters and with a normative bent, in recent years quantitative methods have gained traction by offering a brand new perspective of understanding law. That is, legal scholars have started to crunch numbers, not letters, to tease out the effects of law on the regulated industries, citizens, or judges in reality.

In this edited book, authors from leading institutions in the U.S., Europe, and Asia investigate legal issues in South Africa, Argentina, the U.S., Israel, Taiwan, and other countries. Using original data in a variety of statistical tools (from the most basic chi-square analysis to sophisticated two-stage least square regression models), contributors to this book look into the judicial behaviours in Taiwan and Israel, the determinants of constitutional judicial systems in 100 countries, and the effect of appellate court decisions on media competition. In addition, this book breaks new ground in informing important policy debates. Specifically, how long should we incarcerate criminals? Should the medical malpractice liability system be reformed? Do police reduce crime? Why is South Africa's democratic transition viable?

With solid data as evidence, this volume sheds new light on these issues from a road more and more frequently taken-what is known as "empirical legal studies/analysis." This book should be useful to students, practitioners and professors of law, economics and public policy in many countries who seek to understand their legal system from a different, and arguably more scientific, perspective. » Have you read this book? We'd like to know what you think about it - write a review about Empirical Legal Analysis book by Yun-chien Chang and you'll earn 50c in Boomerang Bucks loyalty dollars (you must be a Boomerang Books Account Holder - it's free to sign up and there are great benefits!)

Prof. Yun-chien Chang is an Associate Research Professor at Institutum Iurisprudentiae, Academia Sinica, Taiwan, and serves as the Deputy Director of its Empirical Legal Studies Center. He was a visiting professor at Faculty of Law, Hebrew University of Jerusalem in Fall 2011. His academic interests focus on economic, empirical, and comparative analysis of property law and land use law. Prof. Chang's articles have appeared in Journal of Legal Studies, Journal of Legal Analysis, Journal of Law, Economics, and Organization, Journal of Empirical Legal Studies, The University of Chicago Law Review, Notre Dame Law Review, among others. His book, Private Property and Takings Compensation: Theoretical Framework and Empirical Analysis, was published by Edward Elgar in 2013. Prof. Chang received his J.S.D. and LL.M. degree from New York University School of Law.