Description - The Enchantress by Michael Scott

The sixth and final book in the New York Times bestselling Secrets of the Immortal Nicholas Flamel series.

The two that are one must become the one that is all. One to save the world, one to destroy it.

San Francisco-
Nicholas and Perenelle Flamel have one day left to live, and one job left to do. They must defend San Francisco. The monsters gathered on Alcatraz Island have been released and are heading toward the city. If they are not stopped, they will destroy everyone and everything in their path.

But even with the help of two of the greatest warriors from history and myth, will the Sorceress and the legendary Alchemyst be able to defend the city? Or is it the beginning of the end of the human race?

Danu Talis-
Sophie and Josh Newman travelled ten thousand years into the past to Danu Talis when they followed Dr. John Dee and Virginia Dare. And it's on this legendary island that the battle for the world begins and ends.

Scathach, Prometheus, Palamedes, Shakespeare, Saint-Germain, and Joan of Arc are also on the island. And no one is sure what - or who - the twins will be fighting for.

Today the battle for Danu Talis will be won or lost. But will the twins of legend stand together?
Or will they stand apart - one to save the world and one to destroy it?

Other Editions - The Enchantress by Michael Scott 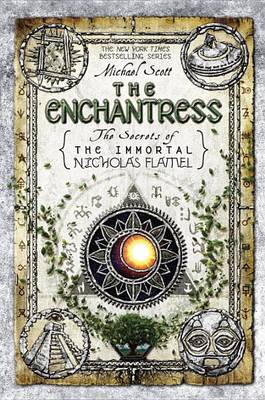 » Have you read this book? We'd like to know what you think about it - write a review about Enchantress book by Michael Scott and you'll earn 50c in Boomerang Bucks loyalty dollars (you must be a Boomerang Books Account Holder - it's free to sign up and there are great benefits!)

An authority on mythology and folklore, Michael Scott is one of Ireland's most successful authors. A master of fantasy, science fiction, horror, and folklore, he has been hailed by the Irish Times as "the King of Fantasy in these isles". All books in Michael Scott's six-part epic series, The Secrets of the Immortal Nicholas Flamel, have been New York Times bestsellers.