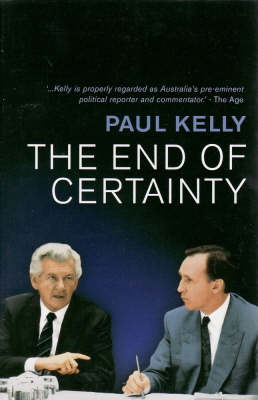 The End of Certainty

Description - The End of Certainty by Paul Kelly

The End of Certainty is a classic study of power, personality and national destiny. From boom to recession, Hawke to Keating, and Labor's victory for the 'true believers' in 1993, Paul Kelly has written the ultimate inside story of how the 1980s changed Australia and its political parties forever.

His detailed scrutiny of the inner working of the Hawke-Keating partnership and its slow disintegration, his unravelling of the crippling rivalries for the Liberal Party leadership and his burrowing into cabinet room struggles over the deregulation of Australia's financial system reveal the brutal realities of Australian politics and how it is played at the very top. But above all, he reminds us of the sheer pace of economic and social change the country lived through and the wake of uncertainty it left behind.

Joining The Hawke Ascendancy, this second instalment in Paul Kelly's analysis of modern Australian politics, remains as compelling and incisive as when it was first written.

Book Reviews - The End of Certainty by Paul Kelly

» Have you read this book? We'd like to know what you think about it - write a review about End of Certainty book by Paul Kelly and you'll earn 50c in Boomerang Bucks loyalty dollars (you must be a Boomerang Books Account Holder - it's free to sign up and there are great benefits!)

Paul Kelly is Editor-at-Large of The Australian. He was previously Editor-in-Chief of The Australian (1991-1996). He writes on Australian and international issues and is a regular commentator on television. Kelly was Graham Perkin Journalist of the Year (1990) and was a double Walkley award winner for journalistic excellence in 2001. He has written widely on international affairs in America, Europe and Asia and has interviewed a number of world leaders including Tony Blair, Lee Kuan Yew, George W Bush and Jiang Zemin.