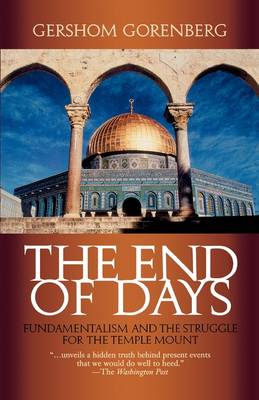 Fundamentalism and the Struggle for the Temple Mount New edition

"End of Days" is a study of the apocalyptic views and struggles between various religious groups, namely Jews, Christians and Muslims, over Jerusalem's Temple Mount, believed to be the key to salvation as the end of the world, the apocalypse, draws near. In this book, Gorenberg weaves a story that stretches from California churches to West Bank settlements, explaining why believers hope for the End, and why prominent American fundamentalists provide hard-line support for Israel, while looking forward to an apocalypse in which they expect Jews to die or else convert. He makes sense of the messianic fervor that has driven Israeli settlers to oppose peace, and describes the Islamic apocalyptic visions that cast Israel's actions in Jerusalem as diabolic plots. At the centre of this turmoil is the site known to Jews and Christians as the Temple Mount and to Muslims as Al Aqsa. Modern Jewish and Christian messianic activists have aspired to rebuild the Third Jewish Temple, each in fulfillment of different biblical prophecies.
Meanwhile, popular Muslim thinking holds that a Jewish desecration or destruction of Al Aqsa may also be a preliminary event to the apocalypse and the ultimate triumph of Islam. Ultimately, the site as described by Gorenberg, is the "single stage on which three different plays unfold...the final day beliefs of the world's major monotheistic faiths" and this book is an exploration of the different religious groups' struggle to reach a final resolution.

» Have you read this book? We'd like to know what you think about it - write a review about End of Days book by Gershom Gorenberg and you'll earn 50c in Boomerang Bucks loyalty dollars (you must be a Boomerang Books Account Holder - it's free to sign up and there are great benefits!)

Gershom Gorenberg is an associate editor and columnist for The Jerusalem Report, a regular contributor to The New Republic and an associate of the Center for Millennial Studies at Boston University. He lives in Jerusalem, where he has spent years covering the dangerous mix of religion and politics.

A Preview for this title is currently not available.
More Books By Gershom Gorenberg
View All

War of Shadows: Codebreakers, Spies, and the Secret Struggle to Drive the Nazis from the Middle East
$44.99 $49.99