Description - The End by Lemony Snicket

Like an off-key violin concert, the Roman Empire, or food poisoning, all things must come to an end. Thankfully, this includes A Series of Unfortunate Events by Lemony Snicket. The thirteenth and final installment in the groundbreaking series will answer readers' most burning questions: Will Count Olaf prevail Will the Baudelaires survive Will the series end happily If there's nothing out there, what was that noise

Then again, why trouble yourself with unfortunate resolutions Avoid the thirteenth and final book of Lemony Snicket's international bestselling series and you'll never have to know what happens.

Other Editions - The End by Lemony Snicket 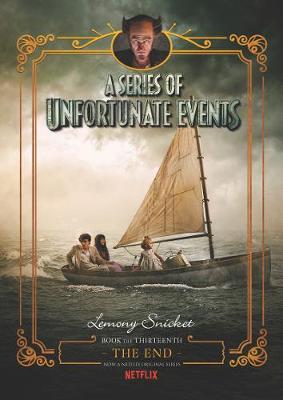 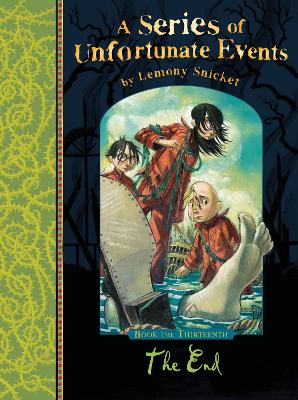 » Have you read this book? We'd like to know what you think about it - write a review about End book by Lemony Snicket and you'll earn 50c in Boomerang Bucks loyalty dollars (you must be a Boomerang Books Account Holder - it's free to sign up and there are great benefits!)

The End is the thirteenth and final book in A Series of Unfortunate Events by American author, Lemony Snicket (aka Daniel Handler). As we once again join the unlucky Baudelaire orphans, they find themselves, much to their dismay, in a boat with Count Olaf.

Having narrowly escaped a burning hospital and already suffered the loss of their parents, the threat of marriage, slave labour, hypnosis, a terrible boarding school, being thrown down a lift shaft, being thrown in jail, acting in a freak show, being thrown off a mountain, almost dying from a lethal fungus, fleeing from a burning hotel and the murder of their Uncle Monty and Aunt Josephine at the hands of the evil Count Olaf and his nefarious assistants, the siblings are ever-vigilant of his reappearance. Luckily these well-mannered and uncomplaining children are also very resourceful: Violet invents, Klaus researches and Sunny cooks.

This instalment sees the Baudelaires shipwrecked on a coastal shelf, shown kindness, offered a safe place, not forced into anything, and yet… The orphans live amongst a group of castaways but end up having to take sides in a schism. They learn about moral compasses, and that dreaded Medusoid Mycelium reappears. They assist with a birth and are witness to two deaths. Readers hoping for the answers to all unexplained issues will be sorely disappointed. Readers who have not yet exhausted their appetite for Snicket/Handler’s writing may like to avail themselves of an associated work, The Beatrice Letters. Ends not with a bang…