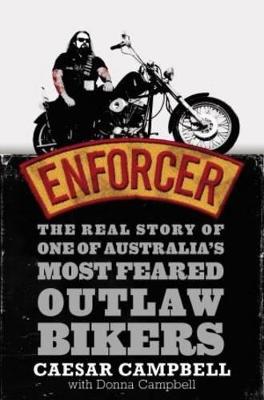 Among members of the outlaw motorcycle clubs, Caesar Campbell is a legend. Former sergeant-at-arms and chief enforcer for the Comancheros, Caesar became the founding member and sergeant-at-arms of the Australian chapter of the Bandidos. He epitomised bikie culture - unbeatable in a fight, brutal in the extreme, fearing no one and nothing, and loyal until death.

This is Caesar's story, from his recruitment into the Comancheros, to the savage split within the club that led to the foundation of the Bandidos and the bloody massacre at Milperra that resulted from it. This was the massacre that saw the death of two of Caesar's brothers, and resulted in four bullet wounds and a lengthy jail term for him.

Never before has someone so respected in the bikie gangs opened a window on to their world. The fact that Caesar has been able to do so is a testament to his ruthlessness, his fearlessness and his reputation in the bikie community.

Enforcer is a unique and captivating true crime story that will shock you with its raw violence, its brutality and its insights into an outlaw world.

» Have you read this book? We'd like to know what you think about it - write a review about Enforcer book by Caesar Campbell and you'll earn 50c in Boomerang Bucks loyalty dollars (you must be a Boomerang Books Account Holder - it's free to sign up and there are great benefits!)

Caesar Campbell was originally a member of the Gladiators motorcycle club and joined the Comancheros at the end of the Seventies. An expert in hand-to-hand combat, and as fearsome with his fists as he was with a knife or baseball bat, Caesar competed ruthlessly in Sydney's underground fighting scene. He was a founding member and sergeant-at-arms of the Bandidos in Australia, and went on to become one of the most feared enforcers in the outlaw bikie world; it was once even alleged that he had a secret graveyard in the Snowy Mountains where he had buried his enemies. Now retired, Caesar lives a quieter life with Donna, his ol' lady and two of his children in their home in the Snowy Mountains region, NSW.

A Preview for this title is currently not available.
More Books By Caesar Campbell
View All