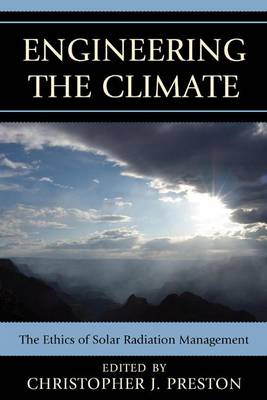 The Ethics of Solar Radiation Management

Engineering the Climate: The Ethics of Solar Radiation Management discusses the ethical issues associated with deliberately engineering a cooler climate to combat global warming. Climate engineering (also known as geoengineering) has recently experienced a surge of interest given the growing likelihood that the global community will fail to limit the temperature increases associated with greenhouse gases to safe levels. Deliberate manipulation of solar radiation to combat climate change is an exciting and hopeful technical prospect, promising great benefits to those who are in line to suffer most through climate change. At the same time, the prospect of geoengineering creates huge controversy. Taking intentional control of earth's climate would be an unprecedented step in environmental management, raising a number of difficult ethical questions. One particular form of geoengineering, solar radiation management (SRM), is known to be relatively cheap and capable of bringing down global temperatures very rapidly. However, the complexity of the climate system creates considerable uncertainty about the precise nature of SRM's effects in different regions. The ethical issues raised by the prospect of SRM are both complex and thorny. They include: 1) the uncertainty of SRM's effects on precipitation patterns, 2) the challenge of proper global participation in decision-making, 3) the legitimacy of intentionally manipulating the global climate system in the first place, 4) the potential to sidestep the issue of dealing with greenhouse gas emissions, and, 5) the lasting effects on future generations. It has been widely acknowledged that a sustained and scholarly treatment of the ethics of SRM is necessary before it will be possible to make fair and just decisions about whether (or how) to proceed. This book, including essays by 13 experts in the field of ethics of geoengineering, is intended to go some distance towards providing that treatment.

Other Editions - Engineering the Climate by Christopher J. Preston 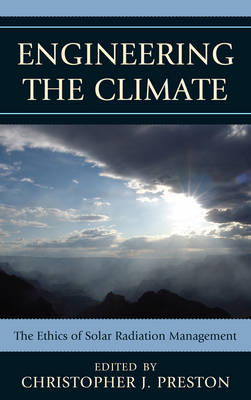 » Have you read this book? We'd like to know what you think about it - write a review about Engineering the Climate book by Christopher J. Preston and you'll earn 50c in Boomerang Bucks loyalty dollars (you must be a Boomerang Books Account Holder - it's free to sign up and there are great benefits!)

Christopher J. Preston is an Associate Professor of Environmental Ethics at the University of Montana. He is the author of Saving Creation: Nature and Faith in the Life of Holmes Rolston, III (Trinity University Press, 2009) and Grounding Knowledge: Environmental Philosophy, Epistemology, and Place (University of Georgia Press, 2003), an edited collection of essays titled Nature Value, and Duty: Life on Earth with Holmes Rolston, III (Springer, 2007), and a special issue of the journal Ethics and the Environment on the "Epistemic Significance of Place."

A Preview for this title is currently not available.
More Books By Christopher J. Preston
View All