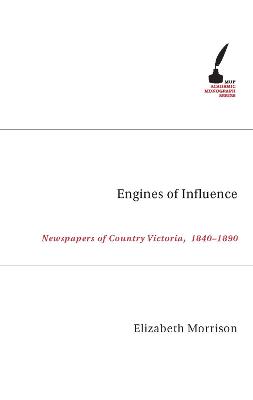 "Engines of Influence is a fifty-year history of Victoria's country newspapers, beginning with James Harrison's Geelong Advertiser in 1840 and ending in December 1890 when 166 papers were being published in 122 country towns.
This significant book identifies all press sites and newspapers of the era, whether long-lasting or short-lived, and highlights the major part played by them in helping construct the machinery of government, lay the foundations of party politics and foster a sense of rural Victorian identity.
The country press was an important agent of political change leading up to events such as the separation of the Port Phillip District from New South Wales in 1851, and the federation of the colony of Victoria with other British dependencies into a single nation at the end of the nineteenth century.
Engines of Influence shows how country newspapers also exercised cultural authority, circulating ideas generated both within local communities and from the wider world.
Towards the end of the fifty years examined, this rural press was becoming a close part of a unified political state, linked through the metropolitan press and agencies

» Have you read this book? We'd like to know what you think about it - write a review about Engines Of Influence book by Elizabeth Morrison and you'll earn 50c in Boomerang Bucks loyalty dollars (you must be a Boomerang Books Account Holder - it's free to sign up and there are great benefits!)

Dr Elizabeth Morrison is an historian and is currently a research associate in the National Centre for Australian Studies at Monash. As a recognised authority on the Australian newspaper press as publisher of serial fiction, she has spoken on this topic at conferences in Australia, the UK, the US and Canada.

Adventures of Gillion de Trazegnies - Chivalry and Romance in the Medieval East
$74.66 $82.95