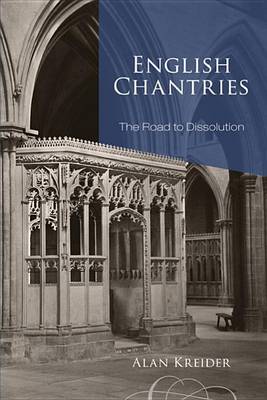 Description: The chantries of medieval England were founded in the belief that intercessory masses shortened the period spent by souls in purgatory. They played a greater role in the daily life of sixteenth-century Englishmen than did monasteries, yet up to now the dissolution of the chantries has not been a popular subject of study. Alan Kreider rectifies this, establishing the importance of the chantries in the story of late medieval and Reformation England. He discusses their social and religious significance. He explains the role of purgatory in the founding of chantries and in the theological debates, popular preaching and political struggles unleashed by the Reformation that led to their confiscation. He explores the forces that led the governments of Henry VIII and Edward VI to jettison traditional practices, and he underlines the pain of state-fostered religious change. Endorsements: ""Kreider's book is among the most remarkable additions of recent years to our knowledge of the late medieval church and the Reformation in England."" A.G. Dickens, University of London. ""Kreider's English Chantries is an excellent piece of work, bringing together a multitude of scattered fragments of evidence to present a coherent account of one of the central aspects of English religious life on the eve of the Reformation. Moreover, in his discussion of contemporary attitudes towards purgatory, Dr. Kreider has made a most valuable contribution to our understanding of the ambiguities and inconsistencies of human motivation that make the Reformation such a continually interesting phenomenon. D.M. Loades, University of Durham, in Heythrop Journal. ""This is a book whose interest far surpasses what its subject might lead one to expect . . . A combination of the rigour expressed in tables and calculations with the attractions of a coolly elegant style brings the story of the chantries to an appropriately elegiac close."" G.R. Elton, Cambridge University, in the Times Literary Supplement. ""The definitive study."" Diarmaid MacCullough, Oxford University. John Ben Snow Prize of the North American Conference on British Studies, honorable mention (1979) About the Contributor(s): Alan Kreider is Professor of Church History and Mission (retired), Anabaptist Mennonite Biblical Seminary, Elkhart, IN

» Have you read this book? We'd like to know what you think about it - write a review about English Chantries book by Alan Kreider and you'll earn 50c in Boomerang Bucks loyalty dollars (you must be a Boomerang Books Account Holder - it's free to sign up and there are great benefits!)


A Preview for this title is currently not available.
More Books By Alan Kreider
View All