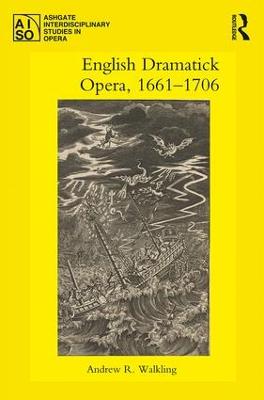 English Dramatick Opera, 1661-1706 is the first comprehensive examination of the distinctively English form known as "dramatick opera", which appeared on the London stage in the mid-1670s and lasted until its displacement by Italian through-composed opera in the first decade of the eighteenth century. Andrew Walkling argues that, while the musical elements of this form are crucial to its definition and history, the origins of the genre lie principally in a tradition of spectacular stagecraft that first manifested itself in England in the mid-1660s as part of a hitherto unidentified dramatic sub-genre, to which Walkling gives the name "spectacle-tragedy".

Armed with this new understanding, the book explores a number of historical and interpretive issues, including the physical and rhetorical configurations of performative spectacle, the administrative maneuverings of the two "patent" theatre companies, the construction and deployment of the technologically advanced Dorset Garden Theatre in 1670-71, the critical response to generic, technical, and ideological developments in Restoration drama, and the shifting balance between machine spectacle and song-and-dance entertainment throughout the later decades of the seventeenth century, including in the dramatick operas of Henry Purcell. This study combines the materials and methodologies of music history, theatre history, literary studies, and bibliography to fashion an entirely new approach to the history of spectacular and musical drama on the English Restoration stage. 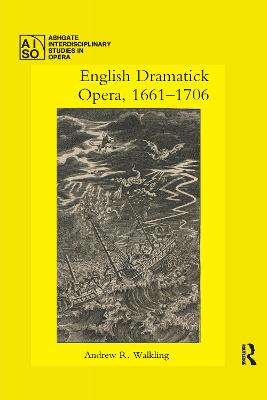 » Have you read this book? We'd like to know what you think about it - write a review about English Dramatick Opera, 1661-1706 book by Andrew R. Walkling and you'll earn 50c in Boomerang Bucks loyalty dollars (you must be a Boomerang Books Account Holder - it's free to sign up and there are great benefits!)


A Preview for this title is currently not available.
More Books By Andrew R. Walkling
View All