Next Only to Death

The local prisons of the latter half of the nineteenth century refined systems of punishment so harsh that one judge considered the maximum sentence of two years local imprisonment to be the most severe punishment known to English law: "next only to death". The punishment inflicted on prisoners was someimes carried beyond the limits of health and sanity. Why was this policy adopted: Who conceived it? What was it like to endure? This work examines how private perceptions and concerns became public policy. It also traces the move in English government from the rural and aristocratic to the urban and more democratic. It follows the rise of the powerful elite of the higher civil service, describes some of the forces that attempted to oppose it, and provides a window through which to view the process of state formation. Next only to the workhouse and the school, local prisons were probably the most widely experienced civil institution of the times, yet by a curious oversight this is the first scholarly study of the subject.
The book is based on exhaustive archive research, and offers a new and original account of a most important episode in English social, legal and administrative history. 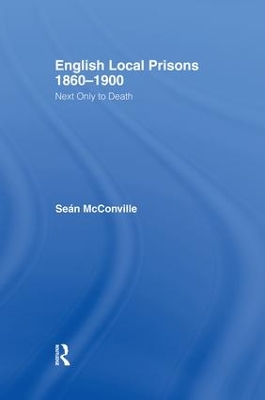 » Have you read this book? We'd like to know what you think about it - write a review about English Local Prisons, 1860-1900 book by Sean McConville and you'll earn 50c in Boomerang Bucks loyalty dollars (you must be a Boomerang Books Account Holder - it's free to sign up and there are great benefits!)


A Preview for this title is currently not available.
More Books By Sean McConville
View All