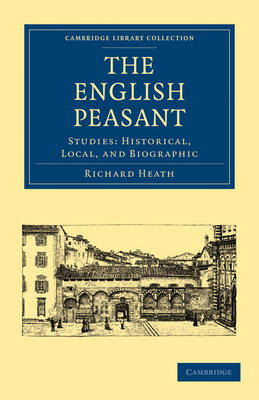 Richard Heath, about whom very little is known, travelled around England, and wrote a series of essays on agricultural workers, towards the end of the nineteenth century, when rural life and agriculture were undergoing great changes. The English Peasant was published in book form in 1893. It begins with an outline history of peasant life, which presents a very depressing picture. Agricultural workers' housing may have been picturesque but was primitive in the extreme, and enclosure of common land had worsened their lot, especially in the south and west of England. Heath gives graphic pictures of the conditions in which peasant families lived and worked, dwelling especially on the high figures for infant mortality. He was understandably shocked that a Christian country could let its workers live like this, but hoped that the foundation of the National Agricultural Labourers' Union in 1872 would result in improvements in the workers' condition.

» Have you read this book? We'd like to know what you think about it - write a review about English Peasant book by Richard Heath and you'll earn 50c in Boomerang Bucks loyalty dollars (you must be a Boomerang Books Account Holder - it's free to sign up and there are great benefits!)


A Preview for this title is currently not available.
More Books By Richard Heath
View All