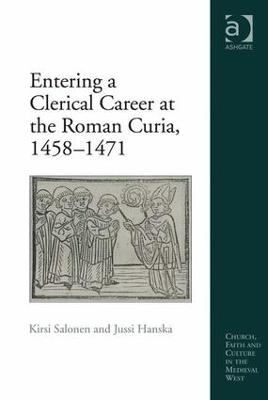 Description - Entering a Clerical Career at the Roman Curia, 1458-1471 by Kirsi Salonen

Building on recent revisionist histories of the quality and ability of the late medieval clergy, this is a comprehensive survey of the ordinations of priests at the Roman curia during the pontificates of Pius II (1458-1464) and Paul II (1464-1471). This period has often been presented as one of stasis within the Catholic Church, falling between the conciliar movement of the first half of the fifteenth century and the Protestant Reformation and counter-reformation of the sixteenth century. However the authors argue that this period was one of gradual reform, whereby the Church attempted to define and control the quality of the clergy. The study analyses archival documentation to reconstruct exactly how young men entered a clerical career, and also what influence practices at the curia had on wider clerical ordinations. The book concentrates especially on the role of the Apostolic Penitentiary in controlling the quality of priest candidates and on the role of Camera Apostolica in carrying out ecclesiastical ordinations in the papal curia. In considering the rules of who could enter the clerical career, and also why and how these rules might be circumvented, this book sheds new light on the late medieval clergy.

Book Reviews - Entering a Clerical Career at the Roman Curia, 1458-1471 by Kirsi Salonen

» Have you read this book? We'd like to know what you think about it - write a review about Entering a Clerical Career at the Roman Curia, 1458-1471 book by Kirsi Salonen and you'll earn 50c in Boomerang Bucks loyalty dollars (you must be a Boomerang Books Account Holder - it's free to sign up and there are great benefits!)

A Preview for this title is currently not available.
More Books By Kirsi Salonen
View All