Alan Patten and His Critics

Multiculturalism is not a la mode nowadays. It is attacked by both right-wing populists and mainstream politicians and leaders of liberal democracies. Indeed, conflicts surrounding cultural diversity and recognition are among the most salient issues in contemporary societies. Should liberal democracies recognise specific cultural rights of minorities? If so, should they grant rights only to indigenous national minorities or also to immigrants? Is such a recognition compatible with the basic liberal principle of state neutrality?

Practical questions of this kind are in quest of sound theoretical foundations. Alan Patten's approach to multiculturalism, developed in Equal Recognition (2014), is the most recent and prominent example of such an effort. Considered "the most important contribution to the philosophy of cultural diversity since Will Kymlicka's Multicultural Citizenship", Patten's work elaborates new and original conceptions of culture and liberal neutrality. It reasserts the case in favour of liberal multiculturalism and applies its theoretical framework to concrete contemporary issues, such as language rights, federalism, secession, and immigrant integration.

This collection presents a critical review of Patten's approach to cultural plurality. The critics question the overall normative strategy of Equal Recognition, its account of neutrality, especially with regards to language rights, its assumptions about democracy and, finally, its relevance to public policy debates. It will be of interest to political scientists, philosophers, and legal theorists, and will inspire students and politicians alike.

This book was originally published as a special issue of the Critical Review of International Social and Political Philosophy. 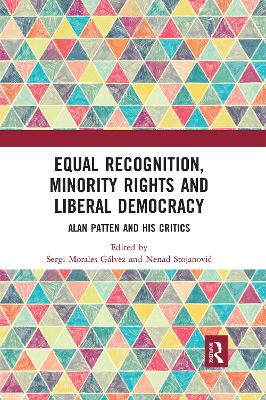 » Have you read this book? We'd like to know what you think about it - write a review about Equal Recognition, Minority Rights and Liberal Democracy book by Sergi Morales-Galvez and you'll earn 50c in Boomerang Bucks loyalty dollars (you must be a Boomerang Books Account Holder - it's free to sign up and there are great benefits!)

Sergi Morales-Galvez is a PhD Research Scholar at the Centre for Ethics, Social and Political Philosophy of the Institute of Philosophy, KU Leuven, Belgium, and a researcher in the FP7 MIME (Mobility and Inclusion in a Multilingual Europe) project. He works on language policy, democratic theory, republicanism, nationalism and multiculturalism. Nenad Stojanovic is Senior Research Fellow and Lecturer at the University of Lucerne, Switzerland. His research interests focus on challenges to democracy in divided societies. He is currently working on a project on electoral discriminations funded by the Swiss National Science Foundation.