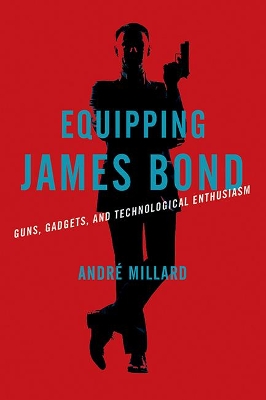 James Bond's amazing gadgets reveal both enthusiasm about technology and fear of its potential ramifications.

The popularity of the 007 franchise depends on a seductive formula of sex, violence, and snobbery. Much of its appeal, too, lies in its gadgets: slick, somewhat improbable technological devices that give everyone's favorite secret agent the edge over his adversaries.

In Equipping James Bond, Andre Millard chronicles a hundred-year history of espionage technology through the lens of Ian Fleming's infamous character and his ingenious spyware. Beginning with the creation of MI6, the British secret service, Millard traces the development of espionage technology from the advanced weaponry of the nineteenth century to the evolving threat of computer hacking and surveillance. Arguing that the gadgets in the books and films articulate the leading edge of technological awareness at the time, Millard describes how Bond goes from protecting 1950s England from criminal activity to saving a world threatened by nuclear bombs, poison gas, and attacks from space.

As a modern and modernizing hero, Bond has to keep up with the times. His film franchise is committed to equipping both Bond and his adversaries with the latest technological gadgets. Simultaneously, Millard stresses, the villains and threats that Bond faces embody contemporary fears about the downside of technological change. Taking a wide-ranging look at factual (and fictional) technology, Millard views the James Bond universe as evidence for popular perceptions of technological development as both inevitably progressive and apocalyptically threatening.

» Have you read this book? We'd like to know what you think about it - write a review about Equipping James Bond: Guns, Gadgets, and Technological Enthusiasm book by Andre Millard and you'll earn 50c in Boomerang Bucks loyalty dollars (you must be a Boomerang Books Account Holder - it's free to sign up and there are great benefits!)


A Preview for this title is currently not available.
More Books By Andre Millard
View All