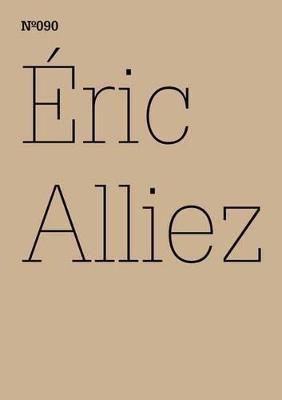 In his contribution, philosopher Eric Alliez visually translates his planned book on diagrammatic thought and its implications for the field of contemporary art to the design of the notebook and its text. It is his response to the format of this German-English publication series, for which usually texts of 3000 words were commissioned. His contribution consists of three parts: in the first two originally French parts, only some of the words are legible in their English translation (or in original German), while the rest of the original can be deciphered from underneath the grey bars that cover it, so that the entire context can be decoded by the reader only through a continuous back and forth between languages and visibility and invisibility. Part III, on the other hand, is translated into English and German and printed without any "blackouts." For the author, this intervention embodies the diagrammatic intervention between the (un)speakable and the (in)visible, and reflects what he summarizes at the second of the second part: "This signal-aesthetic (signestesique) policy of art can, in a contemporary sense-which is a strict alternative to its 'conceptual' version-be described as art after philosophy. In an 'after' (apres) that is not an 'according to' (d'apres) or an analytical finish (appret) (a la Kosuth)-to the extent that it is ontologically 'ahead' (en avant), along with postconceptual criticism and the clinic of philosophy that it transports." Philosopher Eric Alliez is a professor at the CRMEP, Kingston University, London, and at the University of Paris 8

» Have you read this book? We'd like to know what you think about it - write a review about Eric Alliez: Diagramm 3000 [Worte] book by Eric Alliez and you'll earn 50c in Boomerang Bucks loyalty dollars (you must be a Boomerang Books Account Holder - it's free to sign up and there are great benefits!)