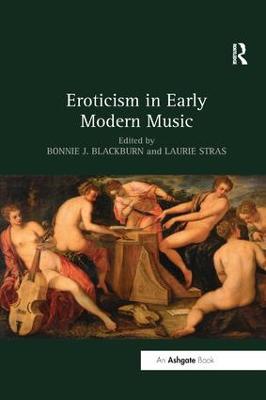 Eroticism in Early Modern Music contributes to a small but significant literature on music, sexuality, and sex in sixteenth- and seventeenth-century Europe. Its chapters have grown from a long dialogue between a group of scholars, who employ a variety of different approaches to the repertoire: musical and visual analysis; archival and cultural history; gender studies; philology; and performance. By confronting musical, literary, and visual sources with historically situated analyses, the book shows how erotic life and sensibilities were encoded in musical works. Eroticism in Early Modern Music will be of value to scholars and students of early modern European history and culture, and more widely to a readership interested in the history of eroticism and sexuality.

» Have you read this book? We'd like to know what you think about it - write a review about Eroticism in Early Modern Music book by Bonnie J. Blackburn and you'll earn 50c in Boomerang Bucks loyalty dollars (you must be a Boomerang Books Account Holder - it's free to sign up and there are great benefits!)

Bonnie J. Blackburn, FBA, is a Member of the Faculty of Music at Oxford University and affiliated with Wolfson College. She specializes in music and music theory of the fifteenth and sixteenth centuries, with a particular interest in compositional practice, early printing, and notation. Her monograph Music for Treviso Cathedral in the Late Sixteenth Century was published by Ashgate (1987) and a collection of her essays was also published by Ashgate in 2000, Composition, Printing and Performance. She has edited the music of Johannes Lupi and two volumes for the New Josquin Edition. Together with Edward E. Lowinsky and Clement A. Miller, she edited A Correspondence of Renaissance Musicians, and since 1993 she has been General Editor of the series Monuments of Renaissance Music. She is also the author, together with Leofranc Holford-Strevens, of The Oxford Companion to the Year. Laurie Stras is Professor of Music at the University of Southampton, UK. She is editor of She's So Fine: Reflections on Whiteness, Femininity, Adolescence and Class in 1960s Music (Ashgate, 2010) and the author of numerous articles and chapters on the music of sixteenth-century Italy and twentieth-century America. She is currently completing a monograph on the female musicians at the court and in the convents of sixteenth-century Ferrara; she is co-director of the early music ensemble Musica Secreta and the female-voice choir Celestial Sirens.

A Preview for this title is currently not available.
More Books By Bonnie J. Blackburn
View All