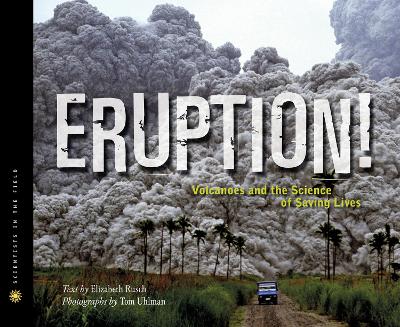 Eruption! Volcanoes and the Science of Saving Lives

Description - Eruption! Volcanoes and the Science of Saving Lives by Elizabeth Rusch

"At 11:35 p.m., as Radio Armero played cheerful music, a towering wave of mud and rocks bulldozed through the village, roaring like a squadron of fighter jets." Twenty-three thousand people died in the 1985 eruption of Colombia's Nevado del Ruiz. Today, more than one billion people worldwide live in volcanic danger zones. In this riveting nonfiction book-filled with spectacular photographs and sidebars-Rusch reveals the perilous, adrenaline-fuelled, life-saving work of an international volcano crisis team (VDAP) and the sleeping giants they study, from Colombia to the Philippines, from Chile to Indonesia. AGES: 9-12 AUTHOR: Elizabeth Rusch has been obsessed with volcanoes since she watched the 1980 eruption of Mount St. Helens on television. She lives in Portland, Oregon. Visit her website at www.elizabethrusch.com. Tom Uhlman has been a freelance photographer for twenty-five years. Visit his website at www.tomuphoto.com." ILLUSTRATIONS: Colour photographs

Other Editions - Eruption! Volcanoes and the Science of Saving Lives by Elizabeth Rusch 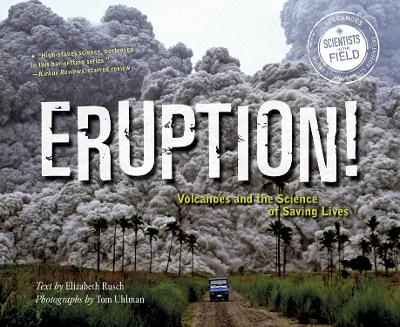 Book Reviews - Eruption! Volcanoes and the Science of Saving Lives by Elizabeth Rusch

» Have you read this book? We'd like to know what you think about it - write a review about Eruption! Volcanoes and the Science of Saving Lives book by Elizabeth Rusch and you'll earn 50c in Boomerang Bucks loyalty dollars (you must be a Boomerang Books Account Holder - it's free to sign up and there are great benefits!)

Elizabeth Rusch's obsession with volcanoes began at age 13, when she watched the 1980 eruption of Mount St. Helens on television. Now she lives in Portland, Oregon, surrounded by Cascade volcanoes. She learned about the incredible work of the volcanologists in this book while researching Will it Blow?: Become a Volcano Detective at Mount St. Helen, which was a Washington Reads pick and a Natural History magazine best book for young readers. Liz's other award-winning nonfiction titles for children include The Mighty Mars Rovers, a Junior Library Guild selection, and The Planet Hunter: The story behind what happened to Pluto. She has also published more than a hundred articles in magazines such as Smithsonian, Backpacker, and American Girl. Liz is the author of Mighty Mars Rovers, a Scientists in the Field book.Tom Uhlman has been a freelance photographer for 25 years. He photographs lots of news and sporting events, but enjoys shooting pictures of wildlife and the natural world most of all. Visiting some of the most famous volcanos in the world and meeting the people who study them was a special treat. Tom's photographs can also be seen in upcoming Scientists in the Field book Park Scientists, and previously in Emi and the Rhino Scientist and The Bat Scientists.

A Preview for this title is currently not available.
More Books By Elizabeth Rusch
View All