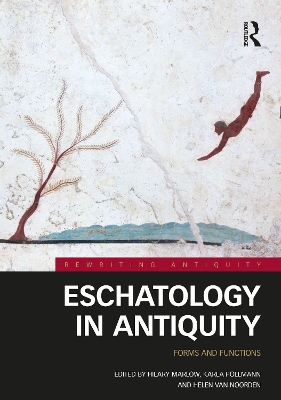 Eschatology in Antiquity: Forms and Functions

Description - Eschatology in Antiquity: Forms and Functions by Hilary Marlow

This collection of essays explores the rhetoric and practices surrounding views on life after death and the end of the world, including the fate of the individual, apocalyptic speculation and hope for cosmological renewal, in a wide range of societies from Ancient Mesopotamia to the Byzantine era.

The 42 essays by leading scholars in each field explore the rich spectrum of ways in which eschatological understanding can be expressed, and for which purposes it can be used. Readers will gain new insight into the historical contexts, details, functions and impact of eschatological ideas and imagery in ancient texts and material culture from the twenty-fifth century BCE to the ninth century CE. Traditionally, the study of "eschatology" (and related concepts) has been pursued mainly by scholars of Jewish and Christian scripture. By broadening the disciplinary scope but remaining within the clearly defined geographical milieu of the Mediterranean, this volume enables its readers to note comparisons and contrasts, as well as exchanges of thought and transmission of eschatological ideas across Antiquity. Cross-referencing, high quality illustrations and extensive indexing contribute to a rich resource on a topic of contemporary interest and relevance.

Eschatology in Antiquity is aimed at readers from a wide range of academic disciplines, as well as non-specialists including seminary students and religious leaders. The primary audience will comprise researchers in relevant fields including Biblical Studies, Classics and Ancient History, Ancient Philosophy, Ancient Near Eastern Studies, Art History, Late Antiquity, Byzantine Studies and Cultural Studies. Care has been taken to ensure that the essays are accessible to undergraduates and those without specialist knowledge of particular subject areas.

» Have you read this book? We'd like to know what you think about it - write a review about Eschatology in Antiquity: Forms and Functions book by Hilary Marlow and you'll earn 50c in Boomerang Bucks loyalty dollars (you must be a Boomerang Books Account Holder - it's free to sign up and there are great benefits!)


A Preview for this title is currently not available.
More Books By Hilary Marlow
View All

Ecology and Theology in the Ancient World: Cross-Disciplinary Perspectives
$162.00 $180.00

The City in the Hebrew Bible: Critical, Literary and Exegetical Approaches
$53.99 $59.99